When I did a Google Image Search for the Japan Snake Center, Google seemed a bit confused, asking "Did you mean to search for: Japan Snack Center?" I didn't, but it turns out they're one and the same. 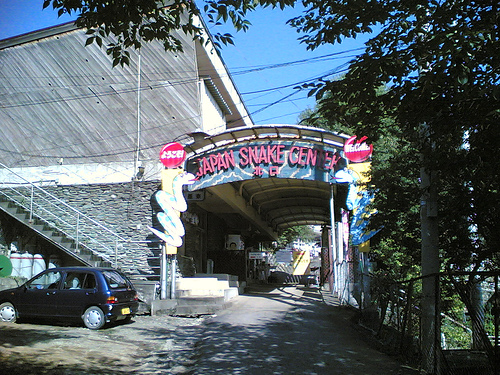 The Japan Snake Center can be found in near the town of Ota in mountainous Gunma prefecture west of Tokyo. It's not really a zoo; more like a combination research center and sanctuary that receives regular new arrivals from Narita Airport.

If Japanese customs inspectors catch you smuggling a live snake, the critter gets sent to the Japan Snake Center. We're not sure where YOU get sent, so play it safe and leave your python pals at home.

If you think that snakes consigned to the Japan Snake Center live long and happy lives, well think again... as you sit down for a "bite" in the JSC cafeteria.

The menu is just crawling with tasty lunchtime treats including Mamushi (Viper) Meatballs or Fried Viper for 1,000 yen ($11) each, and a 5,000 yen ($55) full course featuring Shimahebi, which is Japanese 4-lined ratsnake. The dishes all look rather mouthwatering but I'd have to say, "fangs but no fangs."

If you want to visit the Japan Snake center - for whatever reason - it'll cost you 800 yen ($8.85) for a ticket. Get there early and put the squeeze on some lunch!

Fly With Your Pet: This Time "Guaranteed On Board"
Golden Retriever Lifetime Study May Hold Answers To Canine Cancer

Seniors Get To Do A Little Horsing Around With Miniature Horses
Should Pet Owners Have Medicare For Their Pets?
Comments