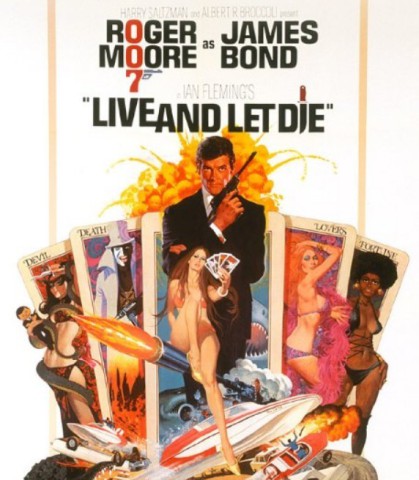 Suave, sophisticated, and very dangerous secret agent 007--James Bond--has found himself in many compromising situations during his long career on the silver screen.  When Live and Let Die premiered in 1973, it ushered in the Roger Moore era of 007 films.  As with each new Bond incarnation, Moore's 007 was different from the two previous iterations of the character (played by Sean Connery and George Lazenby).  This time the character would up the humor and the action while (at times) sacrificing the convoluted spy plot elements.  Be it good or bad, Moore's run in the series lasted seven films.

Roger Moore as James Bond While some were better than others (I still cannot forgive the mess that was Moonraker), all contained breathtaking stunts.  The one stunt that always stood out in my mind was from the first James Bond film I had ever seen: Live and Let Die.  I was around 11-years-old and we had just gotten a test-run of the first pay-channel: Cinema Plus (a precursor to HBO).  One of the films in constant rotation was Live and Let Die.  I must have watched it a million times.  And the scene that stuck with me the most was this:

Just how did they do this magnificent stunt from Live and Let Die?  Fake
alligators and crocodiles with pneumatic triggers built in to make the
jaws snap each time James Bond steps on them?  No.  CGI?  No again--the
technology had not yet been developed.  So, what do you do when you have
a cool escape idea involving close contact with giant, carnivorous
reptiles?  You use the real thing. 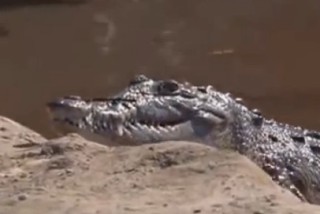 Yeah, that's right.  Rather due to budget issues, lack of creativity on the effect's department side, or just out of sheer bravado, the film-makers decided to use real alligators and crocodiles.  I'm going to go with the latter: sheer bravado.  After all, this is the film that garnered the Guinness World Record for the Longest Speedboat Jump on film: 120-feet.  So why not walk over the backs of a bunch of creatures so tenacious that they are one of the few critters left over from the age of the dinosaur?

Some common sense prevailed.  Instead of using Roger Moore as gator bait, crocodile wrangler Ross Kananga doubled for the actor in this dangerous stunt.  And for good reason.  Look at how many attempts were made to get the perfect shot:

Nope.  Nooooooo.  No way.   I've had my encounters with alligators (I live in Florida).  Having an eight-footer trail my canoe for about a mile is enough for me.  Granted, I accidentally scared the thing by flopping my oar into a patch of grass near the shore.  It dove into the water, scraping its back along the bottom of my canoe.  Then followed, roughly three feet behind me until I reached camp.  To put it bluntly, I had scared it, and it was pissed.

In an age loaded with computer generated action sequences and animals, it is important to remember that people risked their lives daily for just one shot in a film (this is still done, but not nearly as much--the advent of CGI has reduced live-action stunts considerably).  In some ways the new route is a good thing.  There are far fewer injuries incurred, both human and animal.  But what sometimes lacks is the sense of danger, the sense of reality.

This, I believe, is why the crocodile farm escape has stayed with me for all of these years.  The use of real animals (none of which were harmed) made for a fantastic, life threatening stunt.  I doubt that we would see something like this done today.  Plus its a great example of just how menacing and cool alligators and crocodiles can appear.

Just don't ever accidentally hit one with an oar.

PetsLady's Pick: Funny Trick Or Treat Alligator Of The Day

Alligator Pool Parties On The Rise