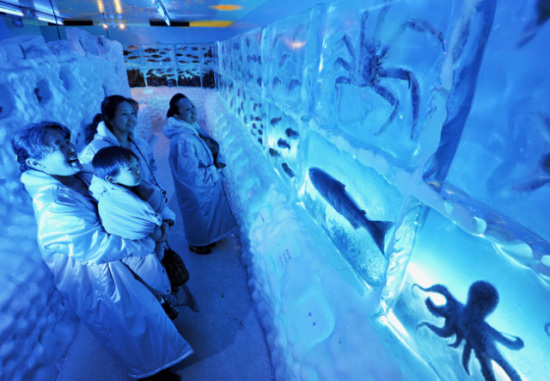 Welcome to The Big Chill, Japanese style! The "Kori no Suizokukan" (Ice Aquarium) in Kesennuma, Miyagi Prefecture, displays around 450 specimens of fish from over 80 different species, flash frozen in a life-like state after being unloaded from fishing vessels at a nearby port.

The Aquarium (more like a museum or a supermarket's frozen seafood section, actually) contains about 50 clear ice columns from which octopuses, crabs, salmon, saury and other local sea creatures gaze out upon human visitors hoping to beat the heat of Japan's notoriously hot & humid summer.

The ice columns are exposed to the open air inside the Aquarium so a powerful refrigeration system is constantly working to keep the ambient temperature at a bone-chilling minus 20 degrees Celsius (-5F).

On hot days, the temperature differential between the Aquarium's interior and the outside air can exceed 50 degrees Celsius (58F). Visitors are able to don protective clothing to help them stay warm while browsing the eerily motionless displays, which are illuminated with icy pale blue lighting to enhance the "frozen world" effect.

The Kori no Suizokukan is made possible by the existence of sophisticated ice-making technology used to flash-freeze freshly caught seafood unloaded in nearby Kesennuma's seaport. The chill atmosphere also makes it possible to preserve and display a hunk of ice brought back from Antarctica by the Japanese Antarctic observation ship "Shirase". Look but don't touch - especially with the tip of your tongue!

Oh by the way... visitors who've worked up an appetite browsing the Aquarium's displays will be pleased to know that there's an excellent Maguro (tuna) Sashimi restaurant just next door. Nice, nice, baby! (via Japan Today, Kyodo News and Planetabicho)

Kelsey the Hero Retriever: Lies On Owner For 20 Hours and Keeps Him From Freezing to Death
PAL Hopes To Impact National Pet Adoptions With Its New Viral Video