Lots of folks who put their missionary zeal on the front burner also stick it to their back bumpers in the form of Jesus Fish. Though they can't see the shining non-secular signs as they cruise down life's highway, we can... and we can do better! These 10 alternative Jesus Fish promote other dearly-held beliefs while taking some of the starch out of those who take theirs a bit too seriously. (Alternative Jesus Fish via Imgur)

Call it a knee-jerk reaction but when confronted and/or affronted by the smug certainty of a Jesus Fish, the most obvious response is a Darwin Fish. Basically it's the basic freehand fish symbol that's “evolved” a pair of added legs. Some versions include the "Darwin" name but if someone can't decipher the implication of a fish with legs then they're in need of some further education, though not in Kansas. A further variation depicts the walking fish grasping a tool, usually a wrench... we'll assume it's a Monkey Wrench. (Alternative Jesus Fish via HC, get your own Darwin Fish here)

Charter members of the Tea Party, red state Republicans and assorted evangelicals rejoice, we have your Jesus Fish right here! This All-American enhanced version of the classic Jesus Fish announces to the world (or anyone following your car) that the best kinds of Christians come in red, white & blue. (Alternative Jesus Fish via Amazon.com)

8) Science of the Times

She (or he) blinded me with science... seriously, this thing reflects light like a supernova on a sunny day. The rocket-shaped science fish will serve to convey to all and sundry that there are plenty of fish in the sea - and they all evolved from lower life forms. (Alternative Jesus Fish via Steve Rainwater, get your own Science Fish here)

Even otherwise observant Jews hate gefilte fish so the success of this item is very much in doubt. Then there's the question of members of the Jewish faith being prominently and publicly marked as such. Didn't somebody try something along those lines in the 1940s? (Alternative Jesus Fish via Brianhe/Wikimedia, get your own Gefilte Fish here)

It's a dog-eat-dog world out there but hey, that's karma for you... and by the way, my karma hit your dogma. This particular Jesus Fish seems to illustrate the triumph of evolution over Creationism in a quite graphic way. I drink your milkshake and then I eat your Jesus Fish, tiny little arms or not! (Alternative Jesus Fish via granolaguy, get your own T-Rex Fish here) 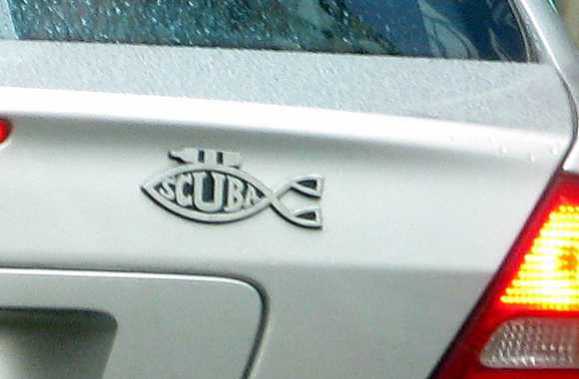 Can one love scuba diving religiously? Why yes, yes one can! And now there's a very special Jesus Fish designed to spread the gospel of Jacques Cousteau throughout the nation's overland transportation system... er, wait, overland? DOH! (Alternative Jesus Fish via Dangerous Intersection, get your  own Scuba Fish here)

3) The Great Old Ones Testament

Cthulhu waits, dreaming... of the day you'll put a Cthulhu Fish on your car! After all, if the purpose of slapping a fish on your Ford is to advertise your belief in a higher power, well, there are more than a few claimants to that particular position. Jesus is way cuter, though, R'lyeh. (Alternative Jesus Fish via Wikimedia, get your own Clthulhu Fish here)

Some people may look down on you for sporting a Sushi Fish on your vehicle but that's fine, you've gotta look down if you're gonna catch the most fish. THat said, it might be hard to tell just what folks are shouting at you, since "Fugu" sounds a lot like... er, another four-letter word that starts with F and contains a u. (Alternative Jesus Fish via Daniel, get your own Sushi Fish here)

Hungry for religion, or just plain hungry? The cutting-edge n'Chips car fish manages to mock both the mocked and the mockers in one fell swoop... hey, they all asked for it. On the other hand, flashing one of these on your bumper is certain to raise the nation's obesity rate by a small but significant percentage. (Alternative Jesus Fish via Debs (ò‿ó)♪, get your own n'Chips fish here) 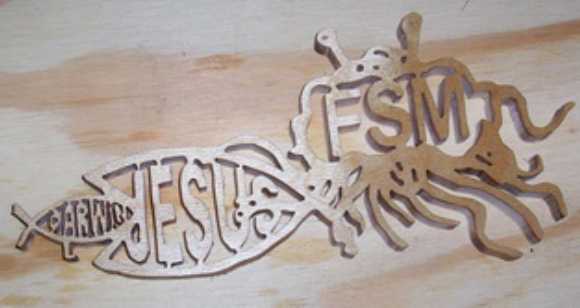 Have A Coke And A Smile -- The Animal Video Of The Day!!!