News Flash: Hey Ms. Mayer, the 1950's called and they'd like their Employee Handbook back!  Well, that's one way to look at what's being viewed as Lady Mayer's draconian work ethic. It appears that the last decade of telecommuting was a failed exercise in the eyes of the new CEO of Yahoo! Now apparently, "working at home" is code for taking care of your kids with a little work thrown in on the side. Needless to say, shock 'n awe ensued on the blogosphere with dissenters heavy in hand with digital torches and pitchforks.

But to them I say it's for naught. While Ms. Mayer is going to take the heat for some time, I'm sure she did not come to this momentous decision without a lot of advice and forethought. And in my humble opinion, there is no amount of push-back that's going to reverse her dictum, now that the proverbial horse is officially out of the barn. So might I offer a suggestion? Since you're forcing the workforce back to your hallowed halls - how about a compromise that would take a little bit of the sting out of that wound?

Why not allow your returning telecommuters to return with their favorite pet in hand te relieve some of the anguish? There's even recent research that supports this type of a work environment. According to a Virginia Commonwealth University study, employees who bring their dogs to work produced lower levels of the stress-causing hormone cortisol.

"When I'm stressed, I usually call Zoe (a chocolate Labrador retriever) over and rub her ear. That's my therapy," said Ann Marie DeLa Rosa, 26, who works at the software design company Inverse-Square in downtown Indianapolis and appreciates greatly the company's pet-friendly policy. 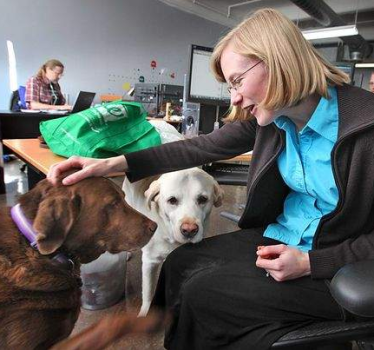 Ann Marie DeLa Rosa & Zoe
SomaTV’s “Pet Friends” recently explored the way that pets can benefit their owners in a business setting. Two of the individuals interviewed on the show, Leo Franken and Stevi Gorosh, who run Image Optical -- an eyewear retailer -- in Vancouver, Canada were forthcoming about their pet experiences at work. Leo’s Pomeranian dog and Stevi’s two cats have essentially become part of the staff. And they say that their pets' presence has helped keep their customers happy. “Pets in the workplace give people a common ground,” says Stevi.

In my previous post, titled, "Celebrate Dogs Punching A Time Clock" I noted the following statistic: Approximately 1.4 million owners take some 2.3 million dogs to work every day, according to an American Pet Products Association survey last year. And these numbers are growing according to DogFriendly.com which lists dog-friendly companies in every state.

Even Ms. Mayer's fellow Silicon Valley cohort, Mark Zuckerberg is in favor of bringing pets to work. Well, at Zuckerberg's "Beast"least his own. His Puli Hungarian sheepdog, "Beast" is often seen pounding away at his own laptop, while attracting over 1.4 million fans on his Facebook page (as of this posting). And what's up with that Ms. Mayer? Do you think having a warm body in the workplace is going to provide you with more productivity, by removing them from some of their home distractions? No, not likely. They'll still be attending to their FB status updates, sending out tweets and even updating their resumes on LinkedIn from the desks and cubicles you're providing them.

So, IMHO Ms. Mayer to soothe the feathers of those you've ruffled, perhaps allowing man's best friend to accompany your returning telecommuters will be just the right touch to get those workers wagging their loyal tails for Yahoo! once again ---and, at the same time, allowing you the allotted time to return to looking glamorous --- instead of hated. 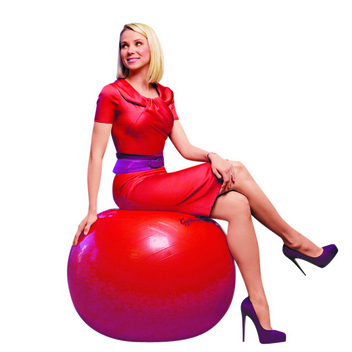