Happy Bark Mitzvah! -- Today I am a Dog!

Was that a Bark Mitzvah? Howl yes! Religion is going to the dogs.

If you have a pet chances are that you consider him or her a valued part of the family. More and more people e want to include their dogs in their spiritual life. After all dog spelled backwards is God. For some that is enough evidence that their pampered pooch is worthy of a place inside the pearly gates. 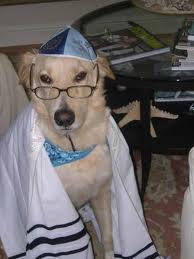 It has long been a tradition in many Catholic, Episcopal and some other churches to allow animals into the church for blessings on the feast day for St. Francis of Assisi.  It is a chaotic, noisy and fun ritual for the faithful in these congregations. However, these days more people want to be able to bring their canine family members along to church for regular services, and not just service dogs. In an outreach attempt to bring more of the flock into the fold, some churches are allowing dogs into the pews. On a rainy day that could give new meaning to "church pew," as would any unintended deposits in the sanctuary or vestibule.

Perhaps the most surprising faith-based dog trend is that of the Bark Mitzvah among Jewish families. The traditional Bar or Bat Mitzvah is a coming of age ceremony in which Jewish boys or girls respectively move symbolically from being a child to being a full adult member of their spiritual community. Early Bark Mitzvahs were done when the dog reach the age of thirteen. Since most dogs do not live that long, the age has been moved to around thirteen months in some cases, while other use the age of two years to approximate the human coming-of-age. These ceremonies are mostly done among Conservative or Reform Jews, no doubt leaving the Orthodox and Hasidic Jews to roll their eyes and ask God what the world has come to now.

Decked out in prayer shawls and yarmulkes, the canines "read" from the Torah. These ceremonies often take place in restaurants, although some take place in the family home. Many of these events are staged for fundraisers and charity, while some people just delight in having a reason to party. In general, dogs have no problems with joining in with the jocularity, although some German Shepherds have been known to  try to perform a bris on male owners. 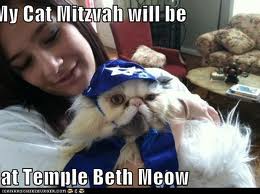 What is the appropriate gift to give a dog for his or her Bark Mitzvah? Fashionable doggie t-shirts are available, as are special Bark Mitzvah toys, such as a stuffed pen, Oy Vey Dog Biscuits, or a fuzzy Driedel.

Feline families don't despair, you, to can celebrate with a fun and stylish Cat Mitzvah (also known as a Meow Mitzvah).  Cats are less likely to be willing to participate without being bribed with a large platter of gefilte fish and a promise in writing that no "purrcumcisions" will be performed. Meow-zel-tov!

When it comes to the spiritual path, most cats tend to be more Zen and prefer to meditate their way to Purr-vana.

* * *
For those of you looking for more detailed info, you can check out How To Raise a Jewish Dog or My Life as a Jewish Cat.

5 Things You Can Teach Your Guinea Pig To Do