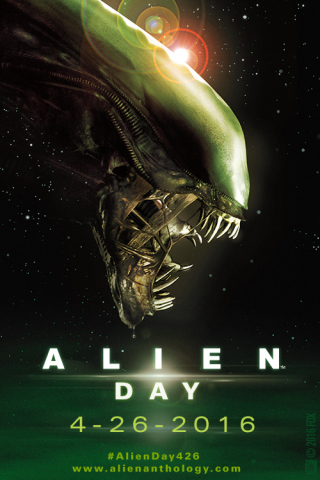 Today--April 26, 2016 (known as 4/26 after the planet named LV-426 in
the Alien movies) is Alien Day!  As such, there are many events going on
celebrating this creepy critter's origin.  We here at PetsLady would be remiss to not show our respect to this xenomorph that (for me at least) has terrified us for decades.  WARNING: Spoilers ahead.

I recall seeing the first Alien, directed by Ridley Scott, in a huge theater when visiting my cousins in Virginia.  I was 14, and they bracketed me in ages.  We somehow talked my Uncle into driving us to D.C. to see the movie.  I recall that it was a giant place, with balconies and a screen so large that it sort of bent around.  When the movie started it immediately blew our minds.  Here are three kids that have their minds set on something like Star Wars or Star Trek.  And we get this:

Holy s**t!  All of the sudden, the fun creatures of Star Wars and Star Trek had shifted into multi-jawed monsters with acid for blood that nestled in the shadows waiting to eat you.  And it didn't help that later that night we were all sleeping in the very comfortable basement of my cousin's house--and the narrow windows reflected the moonlight onto the cylindrical shape of a telescope sitting not far away.  It looked just like the Alien's head. Needless to say, sleeping was difficult that night.

But, several years later James Cameron delivered something of a catharsis in the form of Ripley (Sigourney Weaver) dealing with her nightmares in a very physical (and satisfying) fashion.  She goes to war in Aliens.  And this introduces the Alien Queen into the stories... a massive creature that is intelligent and very, very pissed:

This scene, of which I did not post in its entirety, is one of the most iconic sequences ever put on film: two mothers duking it out.  This is one of the few sequels that equals the original.  But, due to poor management, this was the last home-run in the series.  While we would see the return of this terrifying creature, the franchise derailed a bit.

The director's cut of Alien 3 (directed by David Fincher) is a solid movie--and in fact contains an iconic image of our scary critter (see below).  But due to production and staffing issues, it went into production without a completed screenplay.  Couple that with a complete shift in setting and a relatively unknown director, a cinematography with health issues, and many other issues... well, this was a difficult shoot to say the least.  But (and I'll defend my opinion), if this was viewed as a stand-alone movie... it is really good.  Oh, and here's that iconic scene:

Then we have Alien: Resurrection, directed by Jean-Pierre Jeunet, which I liked quite a bit.  In this film we get yet another creature: a mutation of Alien and human that is horrifying and sympathetic at the same time.  But the "Ewwwwwwwww" factor is huge.  Now: HUGE GROSS OUT WARNING.  I have a high tolerance for freaky stuff, but this pushed even me to the limit.  Check it out if you dare--but don't be eating.  It is just crazy creepy gross... and having viewed it again, I think I'm just gonna put the link here and let you choose.  It pushes past what I think I can actually put onto this site.

Told ya.  You were warned.  The last time I got a lick on the face like that was from a Great Dane.

So... in celebration of Alien Day and the creation of some of the creepiest creatures ever, here is a link to everything going on, including contests, thanks to Collider.com

Oh, and I'm not gonna even touch the Alien vs Predator movies.  That's another article altogether.  So I'll leave you all with this scene from SpaceBalls:

When Puppies Attack! The Cute, Fuzzy Animal Video of the Day!!!

Don't Get in the Way of an Angry Stag! The Testosterone Fuelled Animal Video of the Day!!!

Feeding A Baby Manatee -- The Animal Video Of The Day!!!
Comments