A weird “human-headed” Goldenrod Crab Spider captured on a viral video from Hong Kong has evoked comparisons with the 1958 sci-fi classic “The Fly”, John Carpenter's psycho thriller “The Thing,” and the golden-bodied Skulltula spider from The Legend of Zelda games. 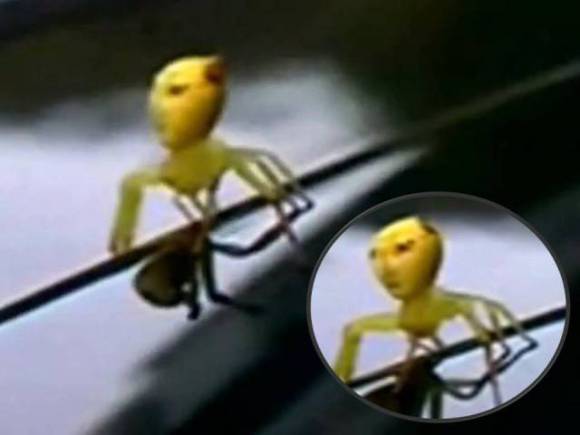 Goldenrod Crab Spiders (Misumena vatia) are relatively common and are found in both Asia and North America. The reason we don't notice them is the spider's ability to change its color to match the bright yellow tint of its favorite home and hunting ground, the flowering heads of the Goldenrod plant.

Slightly less common are white spiders that do not secrete the yellow pigments kynurenine and 3-hydroxykynurenine if they've set up shop, as it were, on white flowers.

The spiders' bloated abdomens often sport spots and bumps that give them, to various degrees, the look of a human face or skull. In the case of the spider featured in the video, the resemblance is enhanced by the way the arachnid is walking on a dark artificial surface (a car's hood?) with its abdomen lifted into the air – possibly to keep it from contacting said surface which may have heated up from sunlight.

The resulting effect of a tiny, human-headed spider or creepier, a tiny human head scuttling along on eight spidery legs is likely enhanced by pareidolia: the mind's natural propensity for seeing faces or other familiar constructs where none actually exist. Seeing faces in clouds, the “man in the moon” or Elvis on a half-eaten grilled cheese sandwich are classic examples of pareidolia but this particular spider just makes it too darned easy!

Viewers of the video and still pics of the seemingly sapient spider have likened it to the human-headed fly who screamed “Help me! Help me!” at the climax of the 1958 sc-fi film The Fly. Another far scarier comparison involves the bizarre scuttling, spider-legged head of Norris from John Carpenter's 1982 horror thriller The Thing, and gamers of all ages will recall the spidery Gold Skulltula creatures from The Legend of Zelda series of games.

As for the spider itself, it was of course oblivious to the excitement it's stirred up and the nearly 250,000 (at press time) views of its video at YouTube. If anything, the creepy celebrity arachnid just wanted to get back to its home flower and munch some lunch. (via Rocketnews24, miss-myers, and glenngould)

What Lies Beneath: A Scary Skate Skeleton

How Are You Celebrating National Dog Day?