Grumpy Cat Goes Hollywood As The New Grinch For Christmas 2014

Grumpy Cat (aka Tardar Sauce), born April 4, 2012 has been an Internet phenom ever since MSNBC named her 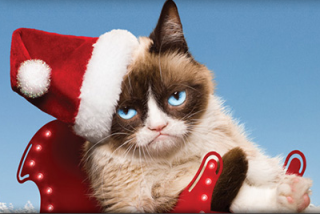 ‘2012’s most influential cat.’ She won BuzzFeed’s Meme of the Year Award at the 2013 Webby Awards, which motivated me to post the blog, titled, “Who Put The Grump In Grumpy Cat & Launched A 1000 Memes,” and the rest has been history.

But not to rest on her laurels, everyone’s favorite grump has turned movie actress by starring in the yet-to-be-released Lifetime movie, “Grumpy Cat’s Worst Christmas Ever.” 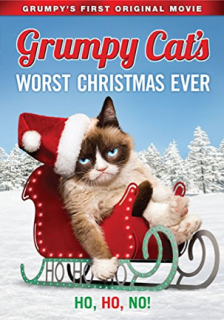 According to her public relation department, the feature is described as a comedy about a lonely cat who resides in a mall pet shop, only to be passed over time and again by Christmas shoppers.

As a result, our feline appears to have been type-cast as she develops a sour outlook on life. That is . . . until that fateful moment when a very precocious 12-year-old girl named Chyrstal enters the pet store and decides on friending Grumpy -- a friendship, which is enhanced by the fact our young heroine is the only one who can hear the cat talk.

In the middle of the holiday rush, the plot follows Grumpy reluctantly getting involved in the kidnapping of an expensive exotic dog she's at odds with, which is followed up by her rescuing Chyrstal after the mall closes its doors on Christmas Eve.

Will Grumpy Cat learn the true meaning of Christmas, or will this holiday become in Grumpy’s words, “Worst, Christmas. EVER?”

Ben Lashes, Grumpy’s manager (yes she has her own manager) -- who also works with Keyboard Cat, Success Kid and other Internet memes -- says Lifetime "is the perfect venue" for her.

For those who can’t wait to catch a sneak peek, Lifetime has released the first trailer for the film, which stars both Grumpy Cat and Aubrey Plaza, the official theatrical voice of said cat.

The movie, written by Tim Hill (of Spongebob Squarepants) and Jeff Morris will debut on Lifetime November 29 at 8 p.m. Eastern / 7 p.m. Central. However, if you also want to gift the movie, you can pre-order the DVD through Amazon at the discounted price of $12.73, which has announced a shipping date of December 16 - just in time for Christmas.

Also if you want to be the first in line for the movie’s accompanying soundtrack, two tunes (‘It’s Hard To Be A Cat On Christmas,’ and the ‘Grumpcracker Medley’) are available now online at iTunes - which are  guaranteed to become instant Christmas classics!