Animals in the wild are analogous to the Gold Rush miners of the Wild West. They instinctively find a way to lay claim to their territory before anyone else does. Cats in particular are not that far removed from their primal nature. Down through the ages, their need to use scent to mark their territory is a way for them to communicate, and leave their calling card behind for others to take notice. But have you ever heard of a case, where a pet owner has adopted the same technique to track and locate their lost pet -- that is, actually leave their urine as a trail marker?

Well, such is the case with TV and movie actress Gina Gershon as the resulto of her obsessive search for her cat Cleo. Willing to use any method possible, the Showgirls actress was wiling to go to any lengths to bring her pet back to roost.  Her book "In Search of Cleo: How I Found My Pussy and Lost My Mind," documents that quest, from soliciting a psychic based on a Ellen Degeneres' suggestion to getting slapped in the face by a Santeria priest and his chicken.

In the book, she describes how she crawled backwards throughout the many streets of West Hollywood leaving a trail of urine to help her furry feline friend find his way back home. Peeing into a Tropicana apple juice bottle was an arduous task in and of itself. Gershon actually wished she was a male to have made the job a lot easier, as she details here...

In storing the urine sample until she was ready to use it was also a hurdle.

Busted by neighborhood resident questioning what she was doing on her hands and knees in her backyard, Gershon quickly realized that she could have just as easily been busted by TMZ or the papparazzi.

So the question that needs to be asked: Was Gershon on the right track in leaving a trail of urine for her cat to detect and follow home?  According to many folks who don't like cats, it is actually believed that human urine causes the direct opposite effect that Gershon and her psychic were seeking. Not only does human urine do the trick in getting rid of cats, its been known to be used by gardeners who sprinkle urine around their vegetable gardens to deter foxes, rabbits and other forms of wild life from eating their crops.

Now, in regards humans actually "marking their territories" with pee, oddly enough, there may be a social media solution for those that want to stake a geolocation claim.

Marking your territories with Foursquare is a techie innovation that's expanded the boundaries of social networking over the course of the last 3 years. The app is today instrumental in providing mobile device functionality to track geolocation deals and promotions with folks on-the-go, in the real world.

However using our primal instincts of marking our territory with urine is definitely a new wrinkle for even mobile apps. Developer Andrew Quitmeyer thought otherwise. He is currently in the process of launching an application and a device that will check you in on Foursquare when you literally pee on the location. According to Quitmeyer’s site for the "Mark Your Territory" project, he describes it as a "mediation on the design of staking claims in physical spaces."

"Mark Your Territory" is an open-source, embodied method for checking into foursquare. It uses the new Android ADK platform for combining Arduino input with an Android device.

Perhaps if Cleo and Gershon had both been members of Foursquare, they could have found each other a lot quicker. In fact with advice on Quitmeyer's website, he notes there's a resource for women who find it difficult to pee outdoors, titled "A Woman's Guide on How to Pee Standing Up." And author Anna Skinner and illustrator Sara Schwartz have even provided visuals in their treatise titled, "How To Pee Standing Up, Tips for Hip Chicks." 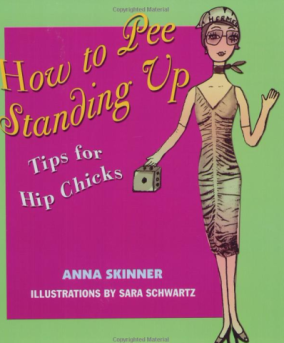 So while helpful in tracking down a lost pet, I can see the advantages of the new app -- but are we really inclined to want to frequent a location one of our Foursquare followers has recently relieved his or herself on? Some might view it as a p*ss-poor reason! Your thoughts readers?

This Mailman is Quite Brave -- The "Being Hunted" Animal Video of the Day!!!