You don't often think about what a dog can contribute to mankind during his or her lifetime, especially since they live relatively short lives. In human years, Giant George would have been 56 years old next month, but at the age of seven (in dog years), the world lost a gentle giant who gave the world as much as he got.

Aside from the unconditional love this Great Dane provided his masters, Dave and Christie Nasser, the owners donated to animal charities, in memory of his name.  And in 2011, more than $500 was sent to a Japanese animal shelter from Giant George's sale of merchandise, after the country was hit hard by both an earthquake and a tsunami.

Ironically born the 'runt of the litter' Giant George grew to over 240+ pounds, 3 feet, 7 inches from paw to his shoulder and came in at almost seven feet in length from head to tail - qualifying him for being the world's tallest dog, according to the Guinness World Records.

In 2010, when GG was acknowledged by GWR in New York City, he was introduced to Boo Boo. This tiny long-haired Chihuahua, measuring only 4-inches, now holds the Guinness World Record as the world's smallest living dog.  Both set of owners were a little nervous at this momentous meeting, but after a few sniffs, some quick wags and an indiscreet lick, it was clear they were going to become fast friends. 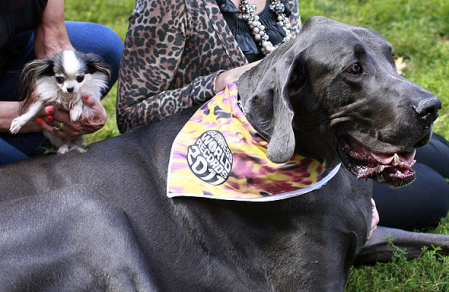 Boo Boo & Giant George scoring BIG and SMALL at the Guiness World Records Ceremony in NYC
The colossal canine was known to consume 110 pounds of food a month and to have slept on his own queen sized bed. In this short YouTube, GG gave a whole new meaning to the word, "babysitting."

GG's master Dave Nasser penned a tome in honor of his favorite pup, titled, "Giant George, Life with the World's Biggest Dog," That publicity, alone catapulted GG into the spotlight with guest spots on "Oprah,""Live with Regis & Kelly," and “Good Morning America.”

With all that attention, one would have thought GG would have learned to take his popularity in stride -- but in actuality, "this big Great Dane was scared of water, scared of dogs a fraction of his size and, most of all, scared of being alone,” noted his owners.

Sadly, George died in Tucson, Arizona, on October 17, 2013. The grieving Nassers wrote: "It is with a heavy heart that we announce Giant George died last night. George passed away peacefully surrounded by loved ones; one month before his eighth birthday."

Family, friends and fans have all posted to George’s Facebook page with their condolences. “Thanks to the Nasser family for sharing him with the world. He will be missed,” one fan wrote. 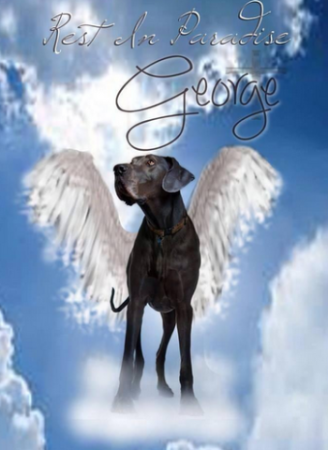 You Wanna Wash Me? Take This! The Animal Video Of The Day!!!
Comments