What are all the ghoul cats wearing this Halloween? Cats don't really take to wearing Halloween costumes (or costumes in general) so you can bet those that do feel as freaky and scary as they look... and they WILL have their revenge on the costumers! 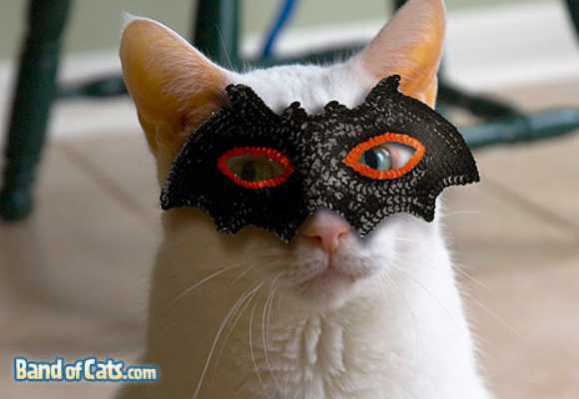 It's the goddamned catman... and we'd tell you where Robin was but it's a long, sad story. Cats are naturally semi-scary, what with their sharp fangs, pointy ears and creepy cat-eyes so adding a simple mask is about all that's needed to turn Miss Kitty into a Feline Fiend. (Halloween Cat Costume image via Band of Cats)

9) Kitten Of The Sea 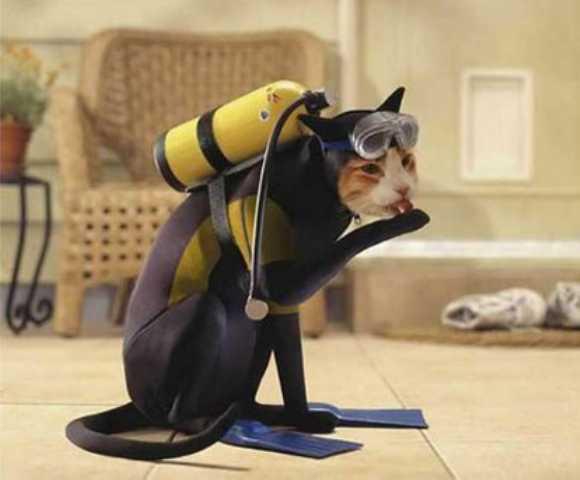 Either this guy's jealous of all the attention Navy “Seals” have been getting lately or he just heard his owner stating there were lots more fish in the sea... and he's gonna get some! (Halloween Cat Costume image via Divercat) 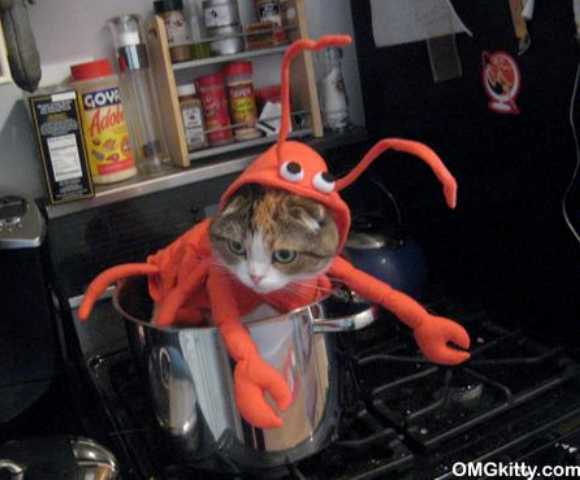 What's the opposite of de-clawed? A cat in a lobster costume, of course! This particular unselfish shellfish is a Scottish Fold cat from Brooklyn, for all of you who just figured she had to be a Maine Coon. (Halloween Cat Costume image via OMGKitty!!!!) 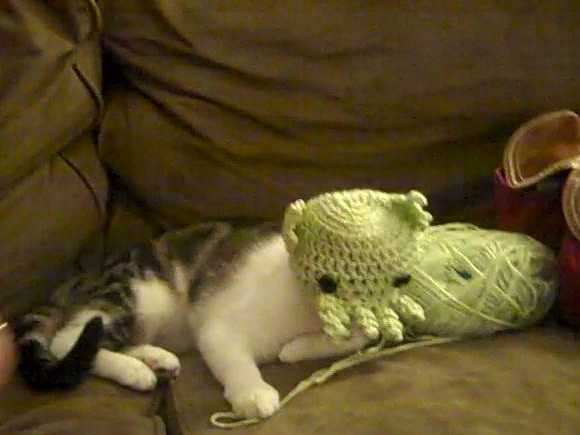 When Lovecraft meets handicrafts, who wins? Nobody, that's who, least of all this well-meaning cat whose innocent attempt to play with some yarn quickly devolved into an encounter with a horror older than time itself... yeah, R'lyeh. (Halloween Cat Costume image via R D) 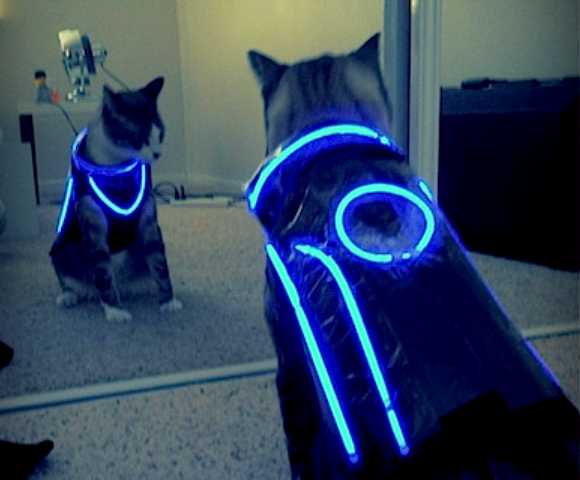 Old and busted: LOLcats. New hotness: TRONcats! And by “hotness” we're considering the possible inclinations of a cat costume that features electroluminescent wiring powered by – you guessed it – electricity. Maybe it's best to leave Big Electric Cat to Adrian Belew. (Halloween Cat Costume image via Costumaniacs) 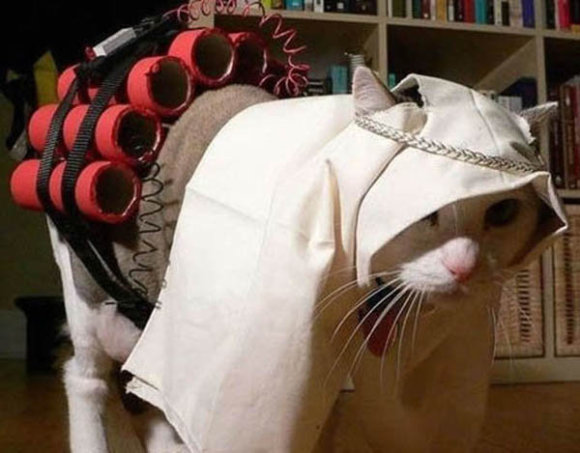 This cat costume is bad and you should feel bad, and knowing it's brought to you by the website Costume Pop just adds insult to injury. One can only hope this disturbing costume doesn't give some even more disturbed humans any ideas. (Halloween Cat Costume image via Costume Pop) 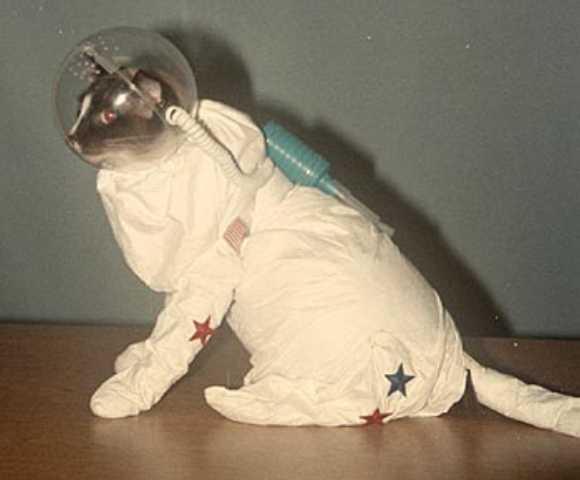 In the early days of the Space Age, the Soviets shot approximately 50 dogs into orbit with some making the trip more than once. Why only dogs and no cats? The wiseguys & gals out there will smirk and say “'Cuz cats is smarter!” The cat in the cosmonaut costume above, however, seems to be wondering why there aren't any fish in the goldfish bowl. (Halloween Cat Costume image via His Name Was Hermann)

Honey, the cat's got into the bread again! The crusty kitty above isn't your average loafer and neither is he half-baked after toking some primo wheat. Rather, this self-styled toast of the town thinks he's the greatest thing since sliced bread. Dough! (Halloween Cat Costume image via pinguino k) 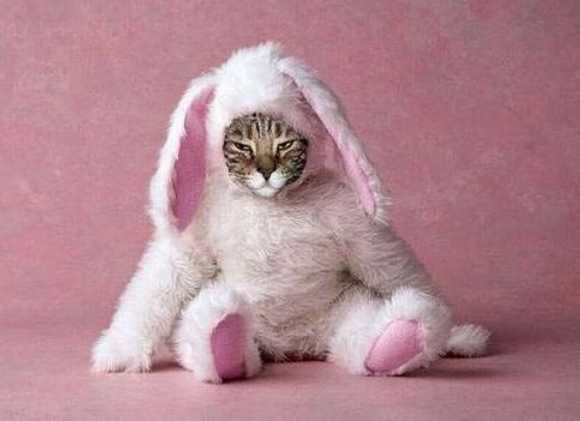 Is that you, Ralphie? Better not give this quietly furious furball a Red Rider BB Gun or it's YOUR eye that's gonna get shot out. The cat in his ridiculous costume isn't what's scary here; the quiet contemplation in his eyes is MUCH more frightening – he could be the poster cat for premeditated pet-owner murder. (Halloween Cat Costume image via Turbo's Blog) 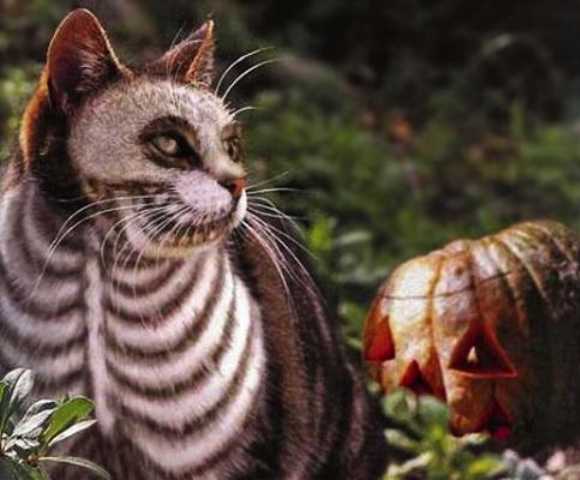 If THIS is what comes back from the Pet Sematary, they oughta knock down the headstones and, say, build a suburban housing development over the plots. The consequences could hardly be creepier than this cursed creature of the cat-acombs. Better buy more Whiskas... with BRAAAAIINS!!  (Halloween Cat Costume image via Fred Tanzella / MNN) 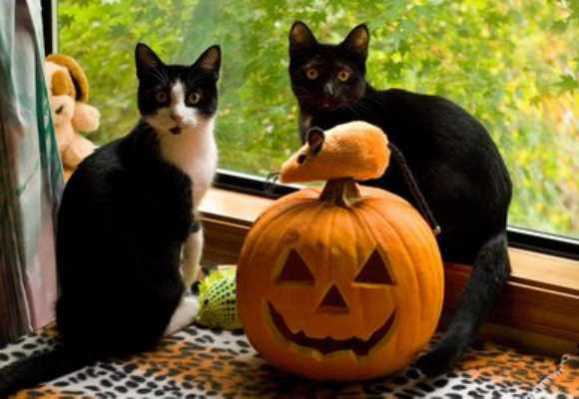 We've gone out of our way to find the weirdest Halloween cat costumes around online and we think we've succeeded. That doesn't mean we're in favor of real cats in real life wearing real versions of some of these costumes, however. Responsible cat owners respect their pets and won't put them in dangerous situations so sure, smile now if you like but please be smart later! (Halloween Cat Costume images via Annalise1988 / pixabay, top, and Halloween-Cards, above)

Pet Costumes
Clothing and Accessories
Top Ten
Halloween
Cats
Halloween Cat Cloak For Vampire Kitties
PetsLady's Pick: Funny Tur-Pug Of The Day
Pet Couture: Your Dog Might Be A Redneck If. . .
Look! On The Treadmill! It's A Bird! It's A Plane! It's The Superpup Animal Video Of The Day!!!
Comments