'Game Of Thrones' Begs The Question: How Do You Raise A Dragon? [Videos]

How cute and cuddly lion cubs seem in zoos and on TV. In a horrific incident that occurred at the Cat Haven Sanctuary in California this year, Dianna Hanson, a 24-year-old intern was suddenly and shockingly mauled and killed by her favorite and most beloved big cat, a five-year-old lion named Cous Cous. Seen as a 3-month old cub on the Ellen DeGeneres TV show, when cats mature, their primal instincts are triggered differently and even their owners are at risk. Could the same be said about Khaleesi Daenerys's dragons on Game of Thrones?

Dragon eggs the Iron Throne and its fiefdom over the Seven Kingdoms. While challenged by male warriors on all fronts, what sets the Khalessi apart from her competition is the fact she is known as the Dragons' daughter. From a burning pyre, she emerges unscathed with her three hatched dragons named Drogon, Rhegal and Viserion making her the indisputable first female Dothraki leader.

But will the dragons be the weapons of mass destruction she needs to overcome those that seek the throne for themselves, or will her maturing litter of dragons turn on her and her people at some point? Note how large one of the dragons has grown at the :45 mark of this 3rd season trailer. Not the cute little creatures they were at birth.

While still babies to Daenerys, they're now babies that can burn down a castle, let alone legions of armies  -- or, even an Iron Throne for that matter.

According to the'Wiki of Ice and Fire,' there are a few tips to predict how Daenerys' dragons might be

controlled as they grow into adulthood. Legend has it that a dragon may be tamed by sounding of the Dragon Horn. However, to date no such horn has surfaced or been used by the mistress.

They are also known to be capable of forming strong attachments to their masters and can be trained by verbal command to initiate attacks against man and his property. While also capricious in nature, Dany's dragons sometimes fight each when they are bored or lack other sport.

As far as sex, and future procreation, it is uncertain whether these dragons will be able to reproduce, since they have no fixed gender differentiation. They are  considered “but now one and now the other, as changeable as flame,” presumably meaning that they are able to change from one sex to the other and back for whatever reason --- making future baby dragons a big question mark at this point.

So, indeed Daenerys may have her hands full when Season 3 commences on March 31. But, I'm sure she will be up for the task in keeping her fire-breathing creatures in tow. After all, surviving burning flames, amassing armies and giving birth to dragons isn't for the faint of heart. As long as those little monsters are always very clear about who rules the roost, eh? 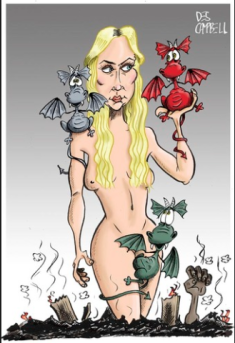 If Humans Acted Like Cats -- The Animal Video Of The Day!!!
Arctic Snowy Owls On Candid Camera In The Wild (Videos)
Comments