Flying The Unfriendly Skies, Eagles Trained To Prey On Drones 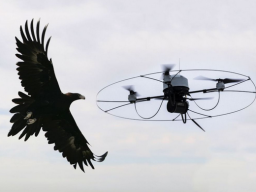 It might sound a bit like a flight of fancy training birds of prey to down drones in banned air space — or a reality-is-stranger-than-fiction version of Hitchcock’s 1960’s dystopian movie “Birds.” But this is not the case, according to an Associated Press report titled, “Eagles vs Drones.“  Incredulous as it might sound, it appears that American’s national bird is being used to fight drones?

Actually, however the birds in question are eagles, but not from the U.S. These eagles hail from the Netherlands, where Dutch police from The Hague are considering using trained raptors to swoop down on rogue drones. The air space considered for such usage would be large events, public gatherings, airports and any other large venue where drones are banned.

Orchestrated by the Dutch National Police and partnering with a “raptor-training company"called the Guard From Above, this training squad is in the process of first training eagles to identify a drone, second — snatch them out of the sky, and third — transport them somewhere out of harm's way. 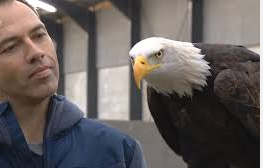 Dennis Janus & Drone-preying EagleNational police officer Dennis Janus notes that his trainers are basing these search-and-hunt missions on the natural instincts eagles have in seeking out their edible prey. Janus says the birds are trained "to think drones are their prey" knowing that they will be rewarded with food each time they down a drone -- kind of like an airborne version of Pavlov's dog.

Janus described the training as a “low-tech solution for a hi-tech problem.”

The following video was released by the authorities demonstrating a drones ascending into the air, before being seized by an eagle's talons — all  in one fluid motion.

The police in charge of this task force will likely make a decision later this year whether or not to use the birds. Janus said part of the evaluation includes research by a respected Dutch scientific organization as to whether catching drones could harm the birds of prey, which is one of the potential downsides. Animal advocacy groups I’m sure would be concerned about collateral damage and physical harm to the eagles, should they caught by a propeller or a rough edge of the aircraft.

To date, however the Dutch Police will continue their tests for several months before deciding whether or not to use eagles in such a capacity.

What are your thought, readers? Dangerous operation or a suitable plan to counter drone surveillance?

Animal Videos of the Day
Bird Care
News Stories
Pet Safety
This Dog Saved A Soldier And Gained A Forever Family -- The Animal Video Of The Day!!!

Goat Versus Cow! The Head-Butting Animal Video Of The Day!!!
Give this Cat a Magazine! The "Potty Trained Feline" Animal Video of the Day!!!
Cheetahs Prove That Cats & Dogs Can Get Along
Comments