A half-billion year old fossil of a previously unknown lobster-like creature has been given the name Kooteninchela deppi in honor of actor Johnny Depp. The small but formidably clawed ancestor of many modern insects, spiders and crustaceans possessed a fiendishly spiky set of claws that immediately reminded researchers of Depp's well-loved film character, Edward Scissorhands. 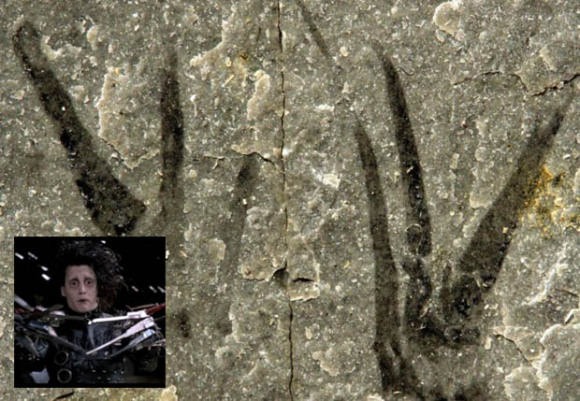 Though only about 4cm (1.6 inches) in length, the segmented and many-legged creature must have been the unchallenged master of its undersea domain approximately 505 million years ago. Not that it had a lot of advanced competition: the Cambrian period of geologic time was the setting for the so-called Cambrian Explosion when most of today's ancestral animal phyla evolved from simpler, soft-bodied forms of life.

As for Kooteninchela deppi, a matched pair of multi-lensed eyes helped it thrive in warm shallow seas where it employed its claws to dig through seafloor sand and sediments in pursuit of its prey... and viciously deal with them once caught! “When I first saw the pair of isolated claws in the fossil records of this species,” stated researcher David Legg of London's Imperial College and an admitted fan of Depp, “I could not help but think of Edward Scissorhands.”

Depp's portrayal of the outwardly fearsome but inwardly gentle artificial boy in the 1990 film “Edward Scissorhands” received rave reviews at the time, and many think the role in the Tim Burton-directed flick was a big boost to the actor's subsequently successful movie career. It remains to be seen whether the discovery of Kooteninchela deppi will do the same for Legg's paleontological rep but odds are he, like Edward Scissorhands, isn't finished yet. (via Correio Braziliense, image via Heather Miller)