Ever Feel Like Shark Bait? Watch Shark Week 2012 On Discovery

Every year Discovery Channel's Shark Week gets more in your face.  The videographers not only take advantage of every innovation in underwater photography, but they are getting up closer and more personal with their subjects.  That is why Discovery's lead line is "If we brought you any closer, you'd be bait." 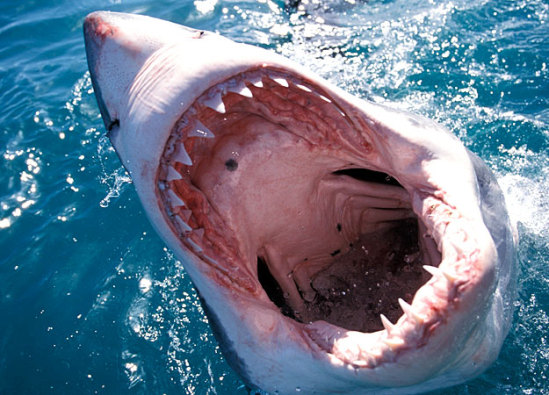 Great White Shark off the coast of South Africa: image via dsc.discovery.com

Anyway, this year is the 25th Anniversary of Discovery's Shark Week and, the previews promise some Jaws-droppers. A full 8 nights of nightmares after watching programs like Air Jaws Apocalypse, Sharkzilla, and Shark Week’s 25 Best Bites.

The show premieres August 12, 2012, but in the meantime you can brush up on the 100 little known facts about sharks on Discovery’s website or look at the brilliant still photographs of sharks just hanging out or jumping or attacking; also of great interest is Discovery’s fish and shark webcam viewing - the Shark-Cam, brought to you live from the "Ocean Voyager" exhibit at the Georgia Aquarium in Atlanta for the months of July and August.

I bet you didn't realize, either, that Shark Week is the longest running annual programming series on cable TV!  It is the most exciting show on TV, I promise. So go get yourself a sharp new Vizio and start watching August 12.  You won't regret it!

Decorate With Animal Gargoyles This Halloween
Hungry, Hungry Hippo! The Scary Animal Video Of The Day!!!

European Football -- The Animals Versus Humans Video of the Day!!!
Comments