Endangered Whale Jerky Dog Treats Are Now Off The Menu

The meat used to make the jerky was imported from Iceland and was sourced from Fin whales, a species listed as “endangered” on the IUCN Red List of Threatened Species since 2008. Icelandic whalers (shown below) caught 125 Fin whales in 2009, a further 148 in 2010, and plans to catch over 180 in 2013. Japan caught a total of 18 Fin whales between 2005 and 2012, all of them from Antarctic waters.

Curiously, Iceland exported 500 to 600 tons of Fin whale meat to Japan in 2011 and it's not clear what proportion of the meat was stored for future use, processed for human food such as school lunches, or acquired by pet food manufacturers. 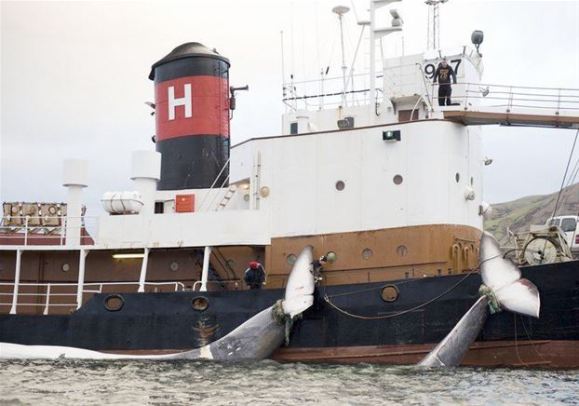 According to a statement issued by the Environmental Investigation Agency, “The product description (for Michinoku's Whale Jerky dog treats) identifies the meat as being Fin whale of Icelandic origin.” It's important to note that while Japan exploits a legal loophole in the IWC's ban on commercial whaling, Iceland openly defies the ban. 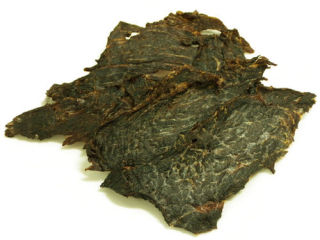 Why bother making dog treats from whale meat of any type, anyway? “Dogs are like family members for many people in Japan,” responded Takuma Konno, president of Michinoku Farm, in an interview with AFP. Konno stated further that it was legal for the company to sell products made from whale meat in Japan and “We just wanted to sell a wide variety of food for dogs. Campaigners look at whales as important animals, but we consider dogs to be just as important.”

The Michinoku Farm website promoted their whale jerky dog treats by touting whale meat as being a high-protein, low fat and low calorie nutrition source compared to beef, pork and chicken. The company also stated that whale meat's purported high levels of DHA and IPA make it effective in cancer prevention and in reducing the onset and severity of canine geriatric diseases. Lastly, whale meat offers dogs that are allergic to other types of meat a viable alternative. IKAN sees things differently, as one might expect. “The most likely reason for shops to sell the whale meat dog treat is to target affluent Japanese who want to show off their wealth with something different,” said Nanami Kurasawa, IKAN's executive director.

Rather than ruffle feathers further and/or inflame the sensibilities of Michinoku Farm's animal-loving customers, Takuma Konno has decided to take the high road. “Maybe I was ignorant of the debate (about whaling), but it's not worth selling the product if it risks disturbing some people,” he said. That might not be exactly what IKAN wanted to hear but they can't argue with the result: previous listings for Michinoku Farm's whale meat dog chews now state the product is no longer available.