Eating Aliens, Less You Be Eaten!

There are certain animals walking this planet that adversely affect the habitats and bioregions they invade. They are technically called "invasive animal species," but according to adventurer, hunter, scientist and author Jackson Landers, they are also considered "aliens." The European Union defines "Invasive Alien Species" as those that are, firstly, outside their natural distribution area, and secondly, threaten biological diversity.

It is from this unique perspective that Landers penned, Eating Aliens: One Man's Adventures Hunting Invasive Animal Species. Spending over a year hunting these creatures throughout North America, he devised a unique solution to the problem, namely, "if you can't beat 'em, eat 'em!"

"We're under attack," says Landers and the only way to fight back is to turn these aliens into breakfast, lunch and dinner. As one reviewer put it, Landers tome is "part travelog, part conservation treatise, and an effective call to arms."

Spiny-tailed IguanaHis adventuresome narrative focuses on twelve invasive animal species such as the spiny-tailed iguanas in Florida, Asian carp in Missouri and Virginia and nutria in Louisiana, to name a few. Also, when he gets to the European green crabs in Connecticut you begin to understand why they may be considered alien, since they most likely crossed borders without going through the proper immigration channels!

Landers, in working in tandem with the scientific research group at the National Oceanic and Atmospheric Administration (NOAA) thinks invasive species management requires aggressive action by us humans. And fork and knife seem to be the proper tools of choice, according to those that agree.

One case study zeroed in on the rapid spread of lionfish infiltrating the eastern seaboard of the U.S. NOAA's

Fishing for Lionfishsolution was to not only deplete the population, but also to promote a campaign that would whet our appetites by promoting lionfish as the catch-of-the-day and the next coastal delicacy. 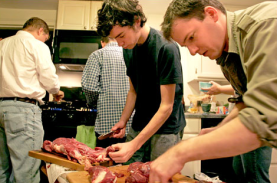 Jackson Lander Cooking up some Invasives!Consequently, Lionfish filets, pan seared in olive oil and lemon pepper in a Bahamian kitchen are just one of the tempting recipes highlighted in Lander's hunting adventure non-fiction cookbook.

In a Martin A. Nuñez book review, he describes each chapter of Lander's work as "its own hunting vignette, highlighting the pursuit of a particular invader, seasoned with a smattering of natural history and biology." Not surprising - when you quickly learn - that most of these invasive meals taste just "like chicken."

"Evidencing that Lander is a hunter first and a 'foodie' second, the actual cooking and eating receives much less attention than the chase, and given the ostensible goals of the book, the imbalance may help motivate some hunters to chase invasives, but will not help bring connoisseurs and chefs into the fold," adds Nuñez. Sort of like "you can bring a horse to water, but you can't make 'em drink!"

So whether or not you're ready to roast up some spiny-tail iguanas any time soon, it's interesting to consider the lives of these pervasive invasives as aliens. But then again, dinosaurs once walked this earth, never to be seen or heard from again. Either they made it to the Neanderthal's dinner table, or they were able to phone home - and got out of Dodge before anyone noticed! 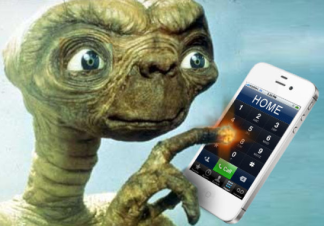 33 Screaming Frogs! Egad! The Animal Video of the Day!!!