The work of the Paul Winter Consort is legendary due in a large part to the inspiration he draws from the natural world. For Homo Sapiens who migrate annually to St. John the Divine Cathedral in Manhattan for his Winter Solstice concerts, over the course of last four decades, he has amassed larger and larger audiences. They are attracted mainly by his spiritual symphonic compositions that incorporate the sounds of animal life, hailing from their indigenous habitats.

Celebrating nature with music for this Grammy-award winner dates all the way back to 1968, when he first heard the sounds of whales -- only later to be able to blend their songs into albums, including his seminal tracks on "Songs of the Humpback Whale."

Then in September '78, he actually introduced a wolf on stage at Carnegie Hall. When

he prompted the audience to acknowledge the canine's millions of years of musical heritage by howling at him, the wolf in turn howled back - marking what Winter describes as "most likely the first time a wolf had (ever) sung at Carnegie Hall."

Today, the haunting "Wolf Eyes" serenade is often used to end many of Paul Winter's concerts, as it engages the audience by actually allowing them to become the Consort's  "Howlelujah" chorus.

Over the course of the last twenty years, Winter has been fascinated by bird's yearly migrations. Working with colleagues and in collaboration with the Great Rift Valley Orchestra, on March 16-17, Paul Winter debuts "Flyways" at St. John the Divine in New York City. This concert is a melodic tale of one of the longest migration of birds in the world, traversing over the terrains of Europe, Asia, the Middle East, the Rift Valley and into the wintering grounds of southeast Africa.

The Great Rift Valley flyway is considered one of the world’s most important bird migration corridors, and the most concentrated and species diverse route for birds migrating between breeding and wintering grounds in Eurasia and Africa. Twice a year, five hundred million birds of 280 species

Cranes in Migrationfollow this route of passage.This flyway overarches a tapestry of ecosystems, cultures, and music traditions.

In a recent Audubon Magazine interview, when contributor Michelle Wilson Berger asked Winter: "How do you translate bird migration into music?" he replied that he finds a theme from the songs the bird sing and then replicates them on musical instruments such as his soprano saxophone. And "for birds that aren't vocal, you can aspire to evoke the emotion -- that slow-motion, graceful, spiral-ballet of the birds when they're soaring," noted Winter.

For those still interested in attending the concert, the "Flyways" world premiere tickets are available Flywaysmusic.org. If you miss it, the Flyways album with be out in fall, 2012, followed up with a sequel pertaining to the North American flyways - a collaboration with the National Audubon Society and BirdLife International—slated for an album release in 2013.

While birds may be considered man's greatest pet in the metaphysical sense, it's interesting to note that they inhabited this planet eons before us. Winter puts it into perspective in his interview with Berger, when he states "we Homo Sapiens are the youngest of all the nine million species on earth." So we may have something to learn from a species that has learned to live and survive in harmony with the planet. According to Winter, man "has not yet learned to do that."

A lot to learn in deed. . . so, play on Mr. Winter - and you will find us migrating to your concerts in greater and greater flocks. . . in an effort to learn those valuable survival lessons. 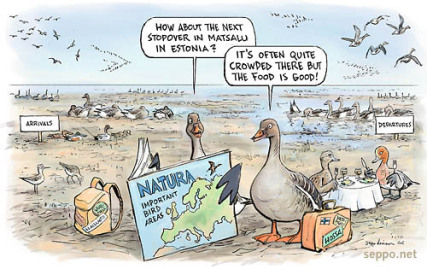