THE DOG Earphone Jack Accessory: Puppies For Your Phone Plug

THE DOG Earphone Jack Accessory is an officially licensed smartphone charm that takes the popular big-headed puppies of "THE DOG And Friends: Artlist Collection” to the next level. 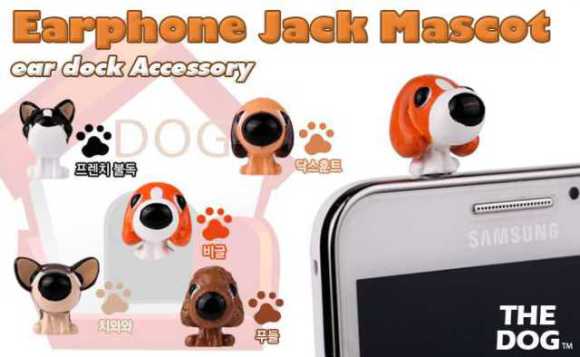 So you've got a dog, you've got a smartphone and life is good, right? Well hold that call and don't let go of the leash 'cause things just got better! If you happen to own a Beagle, Chihuahua, Dachshund, French Bulldog or Poodle, Amazon.com has just the earphone jack accessory you've been looking for.

Now decorative smartphone jack plugs are nothing new and for that matter, neither is THE DOG – the latter burst into pop culture consciousness way back in the year 2000. What IS new is this cute combination of THE DOG's irresistible big-headed puppies and the accessorizing options offered up by the oft-empty earphone jack on every smartphone be it Apple, Samsung, HTC and more.

The rationale for installing an earphone jack plug is that it keeps dust, dirt & debris out of the jack's input hole but come now – how many smartphones or iPhones have been disabled by excess earphone dust? Let's state it plainly: people love their smartphones and they love their dogs, and now the latter can ride along on the former.

As mentioned, sellers at Amazon.com are offering THE DOG Earphone Jack Accessories in your choice of 5 different “breeds”: Beagle, Chihuahua, Dachshund, French Bulldog or Poodle. As the series was only introduced on September 11th, 2012, it's likely other types of popular THE DOG puppy plugs will join the original set... so stay tuned!