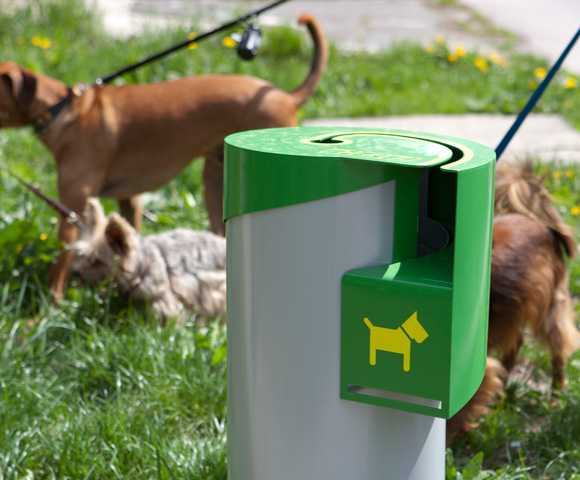 Koros entered a contest announced by a Hungarian municipality for an outdoor dog waste disposal can.

That factor is too often lost on an uncaring public for whom a trashcan is a trashcan. Explains Koros, “The biggest problem with dog waste disposal cans is, that they fill up on domestic rubbish way before time – thus even responsible dog owners can't dispose their pet's waste.”

With this in mind, Koros felt challenged to design a bin that excluded common articles of trash such as glass or plastic bottles, fast-food packaging and just plain junk.

The result is Curve, a clever and fun design that won the municipality's dog waste disposal can contest going away. In a nutshell, users bag their pet's poop, give the bag a twist, and thread the bag's neck through an inwardly spiraling trackway on top of the bin.

Once the end of the spiral is reached, simply let go of the bag! The concept is so straightforward and obvious no instructions are needed, making Curve ideal for use in almost any country without custom signage. Last but not least, Curve incorporates a dispenser for biologically degradable plastic dog waste bags: take one empty; bring it back full. (via Yanko Design)

Products for Pets
Stuff for Dogs
Design
Dogs
Cat Boots! Or are They? The Funny Animal Video of the Day!!!
Yummy, Healthy, K9 Honey For Dogs
Towel Togs Dog Towel: Keeps Dogs Warm, Dry, & Looking Like A Champ
Putting On The Dog With The 10 Hautiest Designer Pet Carriers
Comments