Deadly Blue-ringed Octopus Expanding Its Range Due To Global Warming

The Blue-ringed Octopus is one of nature's deadliest creatures; an average specimen contains enough venom to shuffle 10 adult humans off this mortal coil. The bad news: there's no known antivenom available to treat victims.

The even badder news: warmer ocean waters are allowing the pretty poisonous 'pus to expand its range into areas thought safe by swimmers and surfers.

Blue-ringed Octopuses (or Octopi, if you like) may be small but they pack a big wallop: their venom is estimated to be 10,000 times more toxic than cyanide. The main component of the venom is tetrodotoxin, the same paralytic neurotoxin found in Fugu or Pufferfish.

A bite from a Blue-ringed Octopus isn't especially painful and neither are the effects of the venom but that's no reason to cheer – tetrodotoxin acts quickly and insidiously. By blocking sodium channels, the toxin induces motor paralysis and respiratory arrest in those unfortunate enough to be bitten.

Victims are left unable to breathe; cardiac arrest due to lack of oxygen is only a matter of a very short time. All the while, the victim remains fully conscious and alert: they can't ask for help and don't appear to be in distress but they most definitely are!

Author Michael Crichton “employed” the Blue-ringed Octopus in his novel State Of Fear, in which an eco-terrorist group uses the otherwise innocuous golfball-sized beasties as a presumably untraceable assassination technique.

All well and good, er, bad but why should swimmers, surfers and scuba-divers in more temperate climes need to worry? Historically the Blue-ringed Octopus inhabits  tidal pools and coral reef environments in warmer parts of the Indian and Pacific Oceans... but all that's history, it seems, thanks to Global Warming. 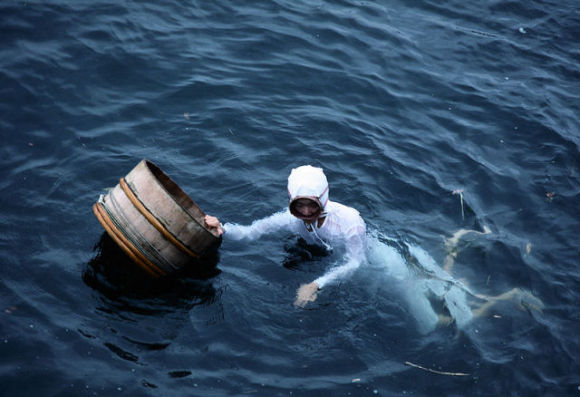 Officials of the Mie Prefecture Fisheries Research Institute in Shima, Japan, recently announced the discovery of two Blue-ringed Octopuses (“hyomon-dako”, in Japanese) in the Kumano-nada area off the coast of southern Mie Prefecture. That's only about 300 km (185 miles) southwest of Tokyo. According to an expert at the Mie FRI, “Their habitat might have expanded north due to the rise in sea temperatures caused by global warming.”

Traditional aquaculture in the waters off Mie Prefecture include by-hand harvesting of spiny lobsters, abalone and pearl oysters. The famous female Ama pearl-divers have been working out of Toba, a coastal town in Mie Prefecture, for many centuries. Warmer waters may make life a bit easier for fishermen and pearl divers but with the rise in heat come unforeseen and unexpected dangers... and how's the water where YOU live lately? (via The Cephalod Page, images via Angell Williams and Fg2/Wikipedia)

News Stories
iFetch Has A Brand New Puzzle Toy For Your Dog: The Award-Winning iDig (w/ video)
Is The Rainbow Bridge Heavenly Or One Bridge Too Far?
I Can Go To Work While My Pet Sleeps In MYLAP™
PA Senate Bill Proposes Ban of Private Possession of Exotic Animals
Comments