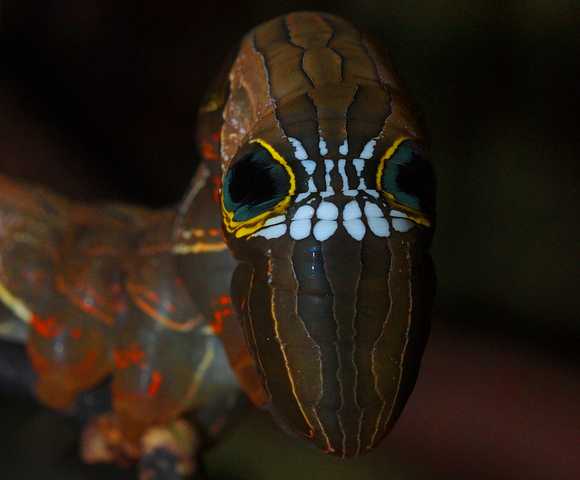 What has no bones and a terrifying skull? The caterpillar of the Imperial Fruit Sucking Moth (Phyllodes imperialis), that's what. This Australian rainforest denizen has evolved a strange and spooky deterrent that fools predators into thinking it's bigger, badder and bite-ier than before.

Few people outside the scientific community have seen the spectacular caterpillar of the Imperial Fruit Sucking Moth up close and personal, but thanks to Teh Intarwebs everyone can share the shocked fascination this creepiest of crawlers engenders.

Native to the barely-penetrable jungle rainforests of northern Queensland in Australia, the Imperial Fruit Sucking Moth (above) superficially resembles Underwing moths common in eastern North America. At rest, both types of moth hide their contrastingly colored hind wings with their larger, duller forewings. The effective camouflage gives the moth the appearance of a dead leaf.

Caterpillars have no wings, however, and must therefore resort to other methods of avoiding predators. In the case of the Imperial Fruit Sucking Moth's larva, the classic Wizard of Oz technique works wonders – if it didn't, the species wouldn't have evolved to its present form.

Like Oz the Great and Powerful, the Imperial Fruit Sucking Moth's larva pretends to be something bigger, badder and more fearful than it really is. It accomplishes this by employing a distinctive group of markings located behind its head and along its sides.

When threatened, the caterpillar rears back while tucking its head. The skin stretches out and the expanded markings take on the look of a bloated head boasting a double row of bright white teeth. The colorful markings on the caterpillar's sides reveal themselves to be large eye-spots. 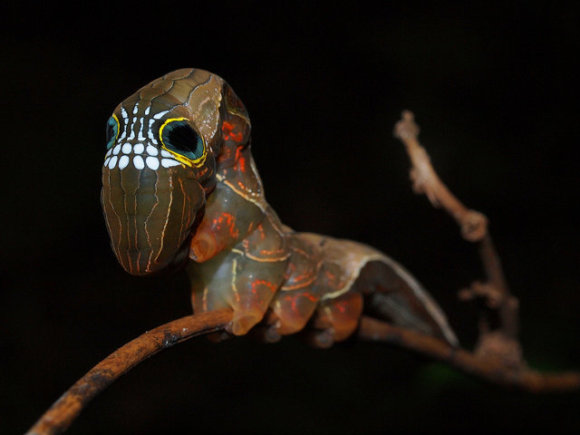 The larval Imperial Fruit Sucking Moth is large as caterpillars go with the final instar measuring up to 12cm in length, just under 5 inches. The sudden appearance of a ghoulish, grinning skull that moves is usually enough to make the lizards, snakes and birds which would normally enjoy eating such a tasty treat think twice before beating a hasty retreat.

Visit Plant.Nerd's photostream at Flickr to view more astonishing images of this amazing creature! (via Geekologie)

Looking For A Career? What About Becoming A Pet Food Taster?

The Mystique Of The Owl: 10 Strange Myths About Owls
Comments