Copyright Case: To Thine Own Selfie Be True, Unless You’re A Monkey? 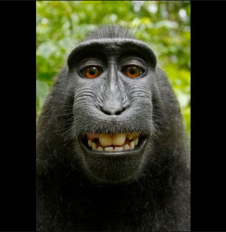 Last year, Wikipedia posted ‘selfies’ taken by a female Indonesian macaque monkey with the disclaimer: “This file is in the public domain, because as the work of a non-human animal, it has no human author in whom copyright is vested.” On the other hand, PETA and other animal rights advocacy groups feel differently. However a CBS report states that U.S. District Judge William Orrick plans to dismiss the copyright lawsuit filed by PETA (People for the Ethical Treatment of Animals) that claims the monkey in question does indeed own the rights to the now famous series of ‘monkey selfies’ -- photographs that have now circumnavigated the Internet many times over.

So what brought us to this juncture? Well, as the story goes, back in 2011, nature photographer David Slater traveled to Indonesia to conduct a photo-shoot of the famed ‘Celebes created macaques’ (aka Macaca nigra). During the event, Slater deliberately affixed his camera to a tripod with the remote trigger available for the macaques to play with. 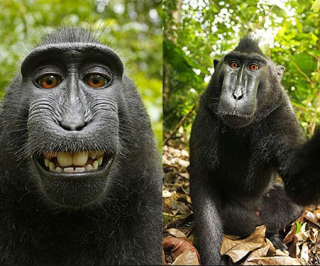 Naruto's two very professional snaps!It was then, that a female macaque who PETA has named ‘Naruto’ clicked the remote to take several photographs of herself. And while some of these photos were not very clear, there were others that seemed like they were taken by a professional. These are photos Slater distributed those photos as the “monkey selfies.”

He then licensed the image with the Caters News Agency, under the presumption he held copyright to the photos. Slater's position is that he was solely responsible for "engineering" the shots, and that "it was my artistry and my idea to leave them to play with the camera . . .(as) I knew the monkeys were very likely to do this (and that there was) a chance of a photo being taken."

Slater's copyright claim was questioned by the blog Techdirt, which argued that the photograph was in the public domain because the monkey was not a legal person capable of holding a copyright, and Slater could not hold copyright to the photo because he was not involved in its actual creation. In essence, according to the report, it was the monkey, not Slater that pushed the button.

With the courts ruling, Judge Orrick declared he agreed with the arguments of the camera owner David Slater and self-publishing software company Blurb Inc., and that federal copyright law doesn't allow animals to claim copyright protection.

"I just don't see that it could go as broadly as beyond humans," Orrick said during a hearing on a motion by Slater and Blurb for dismissal of the lawsuit filed against them last September by PETA, on behalf of Naruto.

Continuing with appeals, PETA President Ingrid Newkirk said in a statement: "As PETA has asserted for years, every animal deserves legal recognition for his or her ability to play, solve problems, and form families and friendships just as binding as that of human beings.” 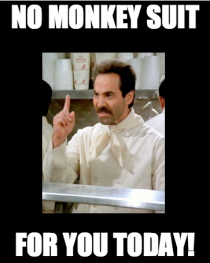 Going forward and as last reported, Judge Orrick will allow PETA to file an amended lawsuit if the group wishes to do so.

PETA attorney David Schwarz told Orrick he plans to do just that, and said outside of court that he will study the future ruling before deciding how to revise the suit.

So readers, what are your thoughts on the issue? Should Naruto get her day in court, and should she be awarded the copyright and the financial gain associated with said photo shoot . . . or does Slater pocket the cash for coming up with the idea? Jury is literally and figuratively --- still out!