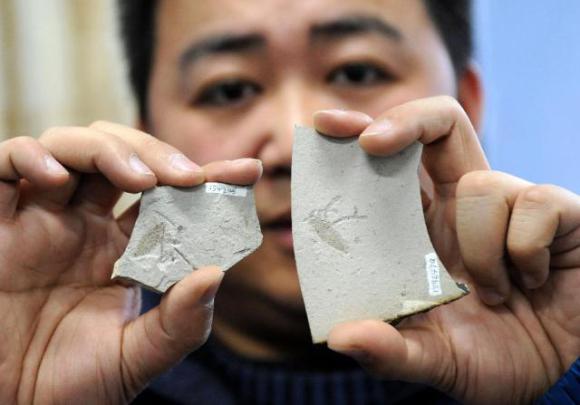 What's with all the Jurassic barking? A surprising fossil find from northern China has given us one more reason to pity poor T Rex: he couldn't scratch his many itches with those two tiny arms. We assume he had itches to scratch because the fossils displayed a variety of giant fleas dating back as much as 165 million years to the heart of the Jurassic period.

“Ancient fleas had stiff bristles, strong claws and longer blood siphons,” explained Huang Diying (right), “allowing them to suck blood from dinosaurs.” Huang is a research fellow with the Nanjing Institute of Geology and Palaeontology. He displayed the immaculately preserved flea fossils in Nanjing, the capital city of east China's Jiangsu Province, on February 29th of 2012.

Huang also pointed out other differences between today's fleas and their jumbo ancestors, such as the fact that the legs of the ancient “dino fleas” were not designed for powerful long-distance jumps. As well, the flattened bodies of the fossilized fleas likely assisted them in keeping a grip on smooth dinosaur hide – modern fleas simply hide in and hold onto the copious hair that covers mammals. Reports on the discovery published at the website of the scientific journal Nature state that fossil fleas found in China's Inner Mongolia Autonomous Region and Liaoning Province measured up to 2cm long – just under an inch! Compare that to their pet-infesting descendants who typically measure a mere 1 to 3 mm (about 0.08 inches) in length.

It should be mentioned that the flea fossils were encased in rock - most likely fossilized shale and mudstone - that preserved the appearance of the insects but not their original organic matter. Jurassic Park fans who expect to revive flea-bitten dinosaurs from their prehistoric tormentors shouldn't get their hopes up! (via People's Daily Online)

LAPD Officers Rescue Dog Left To Die On Roadside
Google Doodle: ‘All You Ever Wanted To Know’ About Komodo Dragons & Then Some

Why Our Canine Domesticus Look So Much Like Us?
Parahawking, When Man & Hawk Take To The Skies Together
Comments