Cats Superior To Dogs According To Robert De Niro & MIT - And Better Drinkers To Boot!

Talk to a cat or dog owner and you'll probably get a different answer -- but has it ever been proven that felines actually excel over man's best friend? Well according to MIT professor Roman Stocker and actor Robert De Niro, their beliefs point to cats being the superior creature - at least in a few areas!

Jack Byrnes & Mr.JinxNow in the case of Oscar-winner Robert De Niro, we don't know if he, himself is if a full-fledged cat person, but certainly his character Jack Byrnes in the "Meet the Parents" movie franchise certainly was. When his daughter's boyfriend Greg Focker played by Ben Stiller appears to be the reason for the Byrne's house cat Mr. Jinx getting loose, he is immediately viewed as untrustworthy in the eyes of his future father-in-law.

Criticizing Focker's career as a male nurse as a sign of weakness, Byrnes compares him to a dog, or what he describes as an "emotionally shallow animal. . . easy to break". . . dissimilar to the hardy make-up of a cat who "makes you work for their affection. . . and won't sell out."

MIT professor and researcher Roman Stocker, on the other hand believes cat are superior to dogs for a

Roman Stockerphysical versus psychological reason. In rescuing his cat "Cutta Cutta" from a Boston animal shelter a couple of years ago, his research uncovered that "cats are actually better drinkers than dogs."

"As it turns out, nature has designed kittens as more resourceful drinkers than their canine counterparts," noted the professor.

When dogs drink water, they use their tongue to scoop the liquid into her mouth. "It’s an inefficient and downright sloppy method of hydration," notes Stocker, as this YouTube video visually documents:

Cats, on the other hand, use a balance of gravity and inertia to get every last drop they lap into their mouths. Cats use the tip of the tongue to pull water upward, and then know exactly when to close their jaws before gravity can return the liquid to the bowl.

"Perhaps the most intriguing part of what we found was that the cats seemed to know just exactly how rapidly or how fast they should lap. By lapping at the right time, [cats] take optimal advantage of this balance between inertia and gravity," adds Stocker.

So in addition to "not selling out," and probably able to drink the other under the table, what else makes cats the superior creature? Well. . . noted wellness veterinarian Dr. Becker sums it up according to their memory capacity. Surprisingly, a dog's memory is only five minutes long, "while cats can remember up to 16 hours." Hmmmnn, I wonder if that theory holds up after a cat has had a few drinks? 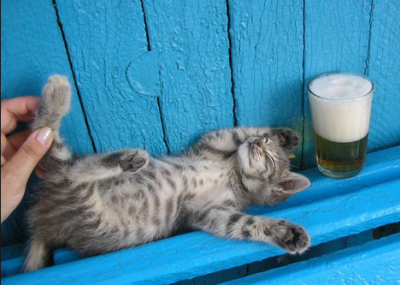