“Neko-Sushi is an extremely unusual life-form consisting of a cat on top of a portion of sushi rice” according to Tange & Nakimushi Peanuts of Japan, creators of a deliciously cat-tastic website & gift shop.

One imagines the idea for the concept was sparked by the sight of a cat resting on a fluffy white pillow one sunny afternoon. The next logical step was to procure or produce a pillow that even more closely resembled a clumped clot of sushi rice, place a sufficiently & naturally compliant cat on top, and garnish to the max... and please DO try this at home, kids, because Tange & Nakimushi Peanuts offer sushi rice pillows for sale at the Neko-Sushi website gift shop. 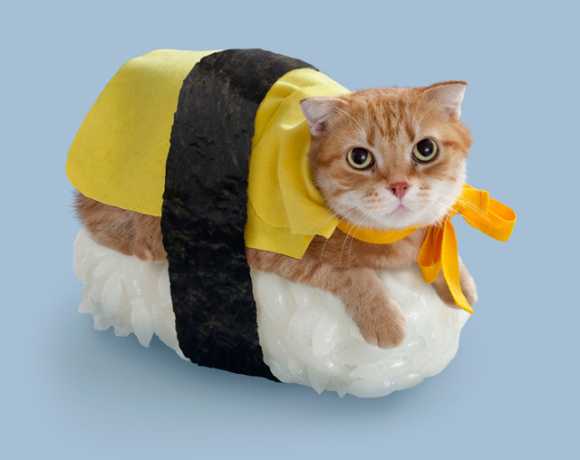 A variety of cats have been enlisted to model for over a dozen different types of cat sushi. Some selections feature edible (or edible-looking) decorations including cucumbers, lobster, onions and egg while others dispense with food altogether in favor of themes such as business, school and crafts like crocheting. The latter stars a grandmotherly calico cat wearing pince-nez specs and packing a pair of knitting needles.

By this point you're likely scratching your head and wondering why the people behind Tange & Nakimushi Peanuts brought the concept of cat sushi to the world's attention. Well, why not?

Like it or not (and really, what's not to like?), Neko-Sushi is a thing and the creators have taken the hairball and are running with it. Bye the way, Tange & Nakimushi Peanuts would like to make if clear that “No cats were harmed in creating this content. All the filming/shooting of the cats was conducted under the guidance of professional animal handlers.” That's rice... er, nice. (via Rocketnews24)