Can Litter Boxes Cause Suicide? Link Shows Up In Studies

Can a parasite transmitted by cats (and commonly found in cat feces) cause changes in your brain and make
you want to kill yourself?  A couple  of recent studies seem to be pointing in
that direction.

Relax, you don't have to get rid of your cat.  Nor should this new information stop you from heading to your local animal shelter and bringing home the new kitty the kids have been clamoring for.  What it should do is increase your awareness of the potential of a single-celled parasite, Toxoplasmosis gondii, sometimes found in cat feces and, therefore, sometimes found in your cat's litter box, to screw around with your brain chemistry.  And there are strong indications that the screwing around has led to some people harming themselves and others committing suicide.

The Link Between Parasites, Cats and Cat Litter Boxes

You already know about Toxoplasma gondii, the parasite that causes Toxoplasmosis, and how it can be harmful to pregnant women and, moreso, to the unborn babies they carry.   But you may not know about recent studies implicating the parasite to changes in your brain.  The results of a University of Maryland School of Medicine study published online July 2, 2012 by the Archives of General Psychiatry point to a possible correlation between women infected with T.gondii and their attempts to harm themselves or commit suicide.  In a study of 45,000 women in Denmark who recently gave birth, Dr. Teodor T, Postolache, psychiatrist and suicide neuroimmunology expert, determined that 488 new moms intentionally hurt themselves and 78 tried to kill themselves.  Eighteen women succeeded in killing themselves.

None of those numbers in a sample this size is really eye-raising ... unless you're a family member or friend of one of the women who were successful in committing suicide (that's an oxymoron if there ever was one, but successful is how we describe suicides that work). Something else the study revealed was that more than one-fourth of the babies tested positive for T.gondii antibodies in blood drawn five to 10 days after birth.  The babies were still too young to make their own antibodies, which means their moms had to have had a Toxoplasmosis infection.

"We can't say with certainty that T.Gondii caused the women to try to kill themselves, but we did find a predictive association between the infection and suicide attempts later in life that warrants additional studies," said Dr. Postolache.

Speaking of new moms in the study, Dr. Louis Weiss, who studies Toxoplasmosis at Albert Einstein College of Medicine in New York, agreed that the numbers in the Danish study are not indicative of a high risk.   "But," he continued, "there probably is an effect of this parasite on human behavior, which has been suspected." 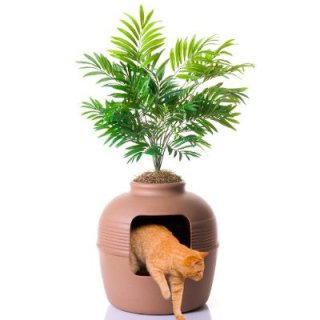 What led Dr. Postolache, who is director of the University of Maryland's Mood and Anxiety Program and a senior consultant in suicide prevention, to study the incidence of suicide among women infected with T.gondii?  Rats.  Rats and mice, that is, who fell in love with cats.  It's true.  A 2011study at Stanford University showed that rats and mice infected with the parasite not only lost their fear of cats but the parts of their brains associated with sexual arousal were activated.  The love-crazed little buggers waltzed right up to cats and promptly made their sexual interests known.   The cats, being carriers of the parasite but not susceptable to its mind-altering ways, promptly did what cats of sound mind will do when encountering a bite-sized rodent face-to-face.  They ate them.  Some researchers believe that this is a way T.gondii ensures that it will get into a cat's gut and, therefore, enable it to produce eggs and continue its survival.

"The parasite does actually alter the brain of its host," Patrick House, co-author of the Stanford University study involving the strange behavior of infected rodents, told ABCNews.com last year.  "The fact that a parasite can get into an organism, target its brain, stay there without killing the host and alter the circuitry of the brain -- we've seen this in insects and fungi, but it's the first time we've see it in a mammalian host."

The Danish study is only one study, you say.  And, even though it involved more than 45,000 women, the number who actually committed suicide is insignificant.  Insignificant to whom?  Certainly not insignificant to the women who killed themselves ...nor to their families and friends.  Furthermore, there are several other studies in suicide behavior that seem to point in a direction similar to the Denmark study, including one at Columbia University which is somewhat similar to Postolache's.  Until more is determined about how this parasite may be able to alter the human mind, isn't it worth taking precautions to prevent it?  If you're a mom-to-be, if not for yourself, than for your baby?

One more thing that should help put your mind at ease if you have a cat: The researchers seem to agree that most T.gondii eggs passed into the environment come from feral cats. Therefore, this is not a reason for pregnant women to get rid of their cat.

T.gondii is not new and it is everywhere.  It's present in anywhere from 20 percent to 40 percent of the North American population, probably even higher in lesser-developed countries, and usually lies dormant inside the bodies of healthy people. About 80 percent to 90 percent of the people infected with the parasite show no symptoms.  Others may develop symptoms which include swollen glands and some may advance to flu-like symptoms or infectious mononucleosis, with a low-grade fever, sore throat, mild diarrhea, muscle aches, etc.

People with AIDS, compromised immune systems, cancer and other serious afflictions, have a different problem altogether.  For them, a T.gondii infection can result in coma, partial paralysis, confusion, seizures and much more.  On rare occasion the disease can lead to inflammation of the brain, the heart, lungs, and other organs.

Women who have Toxoplasmosis and become pregnant don't have much to worry about.  But if a woman is pregnant  and then gets the T.gondii infection, it's possible that the fetus will become infected.  If this happens early, as in the first trimester, a miscarriage may result.  Babies infected later in the pregnancy may be born with brain damage, enlarged spleen and liver, an unusally small head, and other medical problems.

One way to contract the disease is to eat undercooked meat, usually from cows, pigs or sheep.  These animals have picked up the T.gondii parasite by ingesting soil contaminated with eggs expelled by cats.  The eggs hatch, T.gondii penetrate the animal's intestine and form tiny cysts within the tissue.  We ingest the cysts if the meat from the contaminated animal is not thoroughly cooked.  Once inside our stomach, the cysts break apart and the Toxoplasma is released to invade our tissues.

You can also get Toxoplasmosis by eating unwashed vegetables grown in contaminated soil.  One of the unresolved issues in the Maryland study  was that there was no way to determine if this was a factor with any of the infected women.

But only inside the intestines of a cat does T.gondii undergo reproduction and generate eggs.  The eggs pass out of the cat in its feces and can remain viable in moist soil for 18 months or longer.  Humans ingest the eggs after having contact with a cat or litter box where the eggs are present.  For this reason pregnant women have been warned for some time about cleaning cat litter boxes, specifically to avoid any contact with Toxoplasmosis.

How Can You Prevent Getting Infected With Toxoplasmosis?

Pregnant women should avoid cats, if possible.  If you have a cat and are pregnant, there's no need to get rid of the cat.  But stay away from the litter box.  Have someone else change it.

Wear gloves in the garden, expecially if you are working with soil.  Wash your hands thoroughly when you come inside.

Wash and peel fruits and vegetables.

Current studies lead to the conclusion that you can enjoy your pets, but do take precautions!

PetsLady's Pick: Funny Math Cats Of The Day
A Bunny Cat? What's Up With That?