"Usagi-to-Cafe", or "The Rabbit and Cafe", picks up where Japan's other urban pet-palooza, the cat cafe, leaves off. Located in the Japanese city of Nagoya, Usagi-to-Cafe offers patrons a rare chance to unwind and enjoy a light snack while caressing any of the 18 "staff bunnies". Hugh Hefner never had it so good - well, maybe he does but now you can too!

This English-language video from ITN News explains what Usagi-to-Cafe is and why customers think it's the greatest thing since sliced carrots. The cafe's website features an Usagi Gallery where you can view photos of the house bunnies and learn their birthdays, genders and names, which include Chai and Cinnamon.

The cafe also has a BYOB - bring your own bunny - policy enacted because "Home-raised rabbits often reject being cuddled because they are over-pampered", according to cafe owner Naoki Kurata, who explains that "Bunnies here are taught to be amenable that you can pet and cuddle them as much as you want, and many customers like it." One such customer, housewife Tomomi Egashira, stated that "I brought my bunny here today hoping that she would get along with other bunnies." 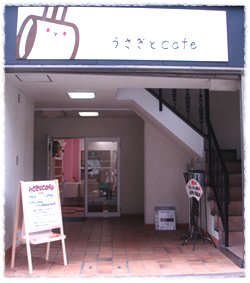 Once at the cafe, customers can enjoy a variety of foods, drinks and snacks including  ham & cheese on a bagel, chocolate-banana parfait bunnies and "rabbit curry", which is not what you think - it's a rabbit-shaped mound of rice surrounded by curry sauce. Whew! It should be noted that unlike Cat Cafes, the dining area at Usagi-to-Cafe is kept separate from the bunny room for hygienic reasons.

Customers can commemorate their experience by browsing the gift shop where assorted bunny-themes knick-knacks, t-shirts and even magician's playing cards are for sale. Usagi-to-Cafe is open from 11AM to 10PM six days a week (they're closed on Wednesdays) and is located on the first floor of the Takashi building, Higashi-ku, Nagoya, Japan.