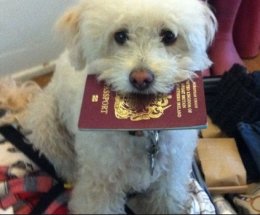 While lawmakers, right wingers and isolationists might all be applauding their decision to leave the European Union, it’s possible that traveling to and from the EU with their pets may grow cumbersome in the very foreseeable future. Among all the macro-level economic theories pertaining to the effects of Britain’s decision to vacate the European premises, from a micro-level perspective, Brexit will be felt in smaller ways that may not work out all that well for pets and their pet owners.

It use to be that British pet owners could bring their cats, dogs and even ferrets in out of the EU countries without incurring quarantine restrictions, as long as they have valid pet passports and the animals were micro-chipped and vaccinated for rabies.

Now, for the unfortunate pets with non-EU owners, there will be many more hoops to jump through. For instance, they may be subject to more stringent restrictions, such as quarantines, health certification and/or blood tests.

The U.K. will have to apply now to the European Commission to be designated as a "listed country," one outside the EU that would still be exempt from the tougher requirements for pet travel.

In Scotland, the Twittersphere has lit up with protests from pet owners against siding with England on the Brexit issue. Lilian Edwards, a law professor in Scotland, posted a picture of her cat on Twitter, curled up on a pillow and looking slightly sad, and added the hashtag #CatsAgainstBrexit, asking other cat owners to join her plight.

This was followed by more Twitter hashtags proliferating: the opposing #CatsForBrexit, as well as #DogsAgainstBrexit and #DogsForBrexit. Even hamsters and ferrets weighed in with their own.

Based in Austin, Texas, PetRelocation.com notes on their website: “Traveling halfway around the world is tough, and fetching the paperwork and jumping through the required hoops of moving your friend to a foreign country only adds to the challenge.”

So to alleviate some of that work and undue stress, the firm's pet relocation veterans insures their ‘pet-owner clients’ that the entire process can run smoothly when they are contracted to assist. From paperwork and immunizations, to a safe flight and personalized, door-to-door pickup and delivery, this company might be just the aid Brexit pets and their masters need at this point in time.

So, if you have a pet move planned to or from the UK, this is a resource you should consider, as PR keeps up to date on all import and export regulations as changes occur. And you can be certain, there will be a lot of changes and red tape as the EU determines just how many dogs and cats they will accept from that outlier country that chose to leave their union in the summer of 2016.