Bizarre 'Sand Puppies' Could Be Next Japanese Character Sensation

Naked mole rats dig deep into Japanese hearts... in a GOOD way. What were you thinking? The so-called "sand puppies" at the Ueno Zoological Gardens in Tokyo, Japan, just might be the next cute character sensation, and the Zoo is helping things right along by selling plush toy versions of the bizarre, bucktoothed zoo animals. 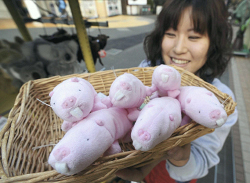 According to one sand puppy groupie, a 31-year-old woman who regularly visits the zoo (perhaps in search of a life), "It has such an awful name and appearance, but it's this dark side that, contrary to expectations, makes them attractive." There you have it, bald rats can be Bad Boys too.

Said to be popular with young women, the hadaka deba nezumi (literally, "naked bucktooth rats") were first acquired by the Ueno Zoological Gardens in 2001. Visitors enjoyed watching the 4-inch long wee beasties scuttle through a network of plastic tubes but when cartoon heroine Kim Possible got one - named Rufus - as a pet, interest in the fur-less varmints really took off.

Social mammals that act more like ants or bees than rats or mice, naked mole rats live in structured underground societies led by a queen, defended by soldiers and populated mainly by workers. These weird animals are found in East Africa and are not considered endangered.

They ARE considered to be weird, though... living underground has spurred them to evolve a cold-blooded metabolism that can be slowed in tough times. This lifestyle has one benefit: long life. Naked mole rats are the longest-lived of all rodents and remain active and functional into their late 20s. That's more than some people I know!

In any event, the 16 naked mole rats at Tokyo's Ueno Zoological Gardens (plus another batch at the Saitama Children's Zoo north of Tokyo) are rapidly becoming superstars and the Zoo's management are feeding into the frenzy by stocking their gift shops with sand puppy plushies, buck teeth and all. They sort of look like tiny walruses (walri?)... now how cute is that? (via Daily Yomiuri Online, images via Mooshuu and Josh More)

What Resolutions Should Your Pets Make For 2019?
Comments