Some think of a "big year" as one that marks a significant birthday or anniversary -- giving cause for a grand celebration. Others in the birding world use that term to denote a very different milestone entirely. A big year for birders is when serious bird-watchers get even more serious by dedicating 12 months of their lives to seeking out and counting bird species.

A big year is an informal competition among birders to determine who can see or hear the largest number of bird species within a single calendar year covering a specific geographical area. It may be conducted in a single U.S. state or an entire continent.

The year 1998 was a celebratory year for one birder who continues to hold the North American record. It was

Sandy Komito that year that the "legendary human bird-dog" Sandy Komito recorded the most species to date.

Documented in his book, "I Came, I Saw, I Counted," Komito details his journeys to Attu, Alaska and Newfoundland where he got to add species only found in those remote pelagic

environs. He repeatedly crisscrossed the southern and western parts of the United States to follow specific migratory patterns, and he also uncovered rare and accidental visitors that occasionally find their ways to our shores, due to climate shifts, like in the case of El Niño.

While there's an estimated 10,000 different species of birds in the world, there are only 914 species in North America approved by the American Birding Association (ABA).

This brings us to the questionable totals that have been credited to the big year of 1998.

In the 2011 movie, The Big Year, screenwriter Howard Franklin uses Komito's 1998 quest as a backdrop, but in true Hollywood fashion takes creative license with the facts. Instead of the well-respected birder Komito, the movie offers up actor Owen Wilson playing Kenny Bostick, a slightly arrogant know-it-all birder who uses every trick in the book to outwit and ultimately outnumber the competition. When the results role in at the end of the film, Bostick tallies a first-place nod with 755, beating his previous year's total of 732.

However, the actual historical record-breaking number is slightly lower -- and --- for a period of time, there was controversy regarding its authenticity. While on the honor system, Komito actually changed his final number. Though widely publicized on birding blogs and even in his own book, Komito's upped his 745 species total to include an additional three species.

The rationale behind the change was based on uncovering 4 more species, previously not approved by the ABA. He then submitted these 4 species to individual state's Rare Bird Committees who in turn presented them to the ABA. After their review, the ABA accepted 3 out of the 4, upping Komito's total to the final tally of 748. This audio recording by Komito provides additional detail as to the submission process that allowed him to claim the higher number.

So, is a big year  in the cards for you? Has it made it to your bucket list, yet? Well, if you're a birder, and even can afford a full year of travel, you've got your work cut out for you. . . particularly if you want to score the biggest big year yet. While the good news is there's only 914 species under contention in North America, the bad news is you have to surface 749 to surpass the work of an 81 year-old who today resides in Fair Lawn, New Jersey and has pretty much hung up his binoculars -- that is, unless another El Niño beckons him back to the counting competition - then, it's a whole new ball, erh bird game! 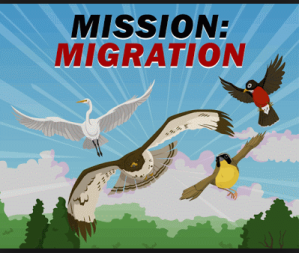 Saving Valentina: The Animal Video of the Day!!!

Who Says Spiders Can't Be Cute? Jumpin' Animal Video of the Day!!!

10 Weird Animal Defense Mechanisms -- The Animal Video of the Day!!!

Who's Guilty? The Animal Video of the Day!!!
Comments