Can't go too far these days without seeing a GoPro camera filming something unique up close and personal. 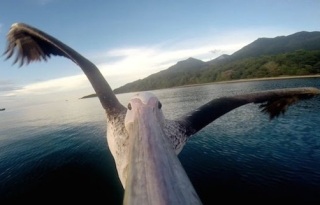 Skiers and snowboard athletes took it to the Sochi slopes for the recent Winter Olympics. Amateur photographers have captured roller-coaster rides and hot airplane balloon flights using it. And while Ellen DeGeneres showed us a whole new way of taking a selfie, "Big Bird," a Great White Pelican of Tanzania could be acknowledged as the world's first video selfie by a bird in flight.

For one of our favorite feather friends known for soaring great heights, Big Bird's story however includes an additional challenge you might never suspect - he didn't know how to fly?

This male Great White was found on the shores of the African Great Lake Tanganyika where it washed up after a particularly nasty storm several months back. The caring staff at the Greystoke Mahale Lodge took it upon themselves to care for him and nurse him back to health. This included teaching him to fly - since that skill didn't seem to have been passed down from Big Bird's parents. Speculation is he was separated from his flock which could have been the Katavi National Park located about 150kms from the resort as the proverbial crow flies.

With viral views of now more than 2 million, the achieved effect was the result of affixing a GoPro Hero 3 camera to the pelican's injured beak.  And his human fight teachers actually trained him to take to the sky by 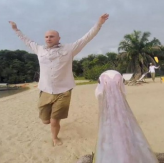 "He didn't fly for some weeks but with encouragement he got the idea. We aren't sure how much flying he may have already done before arriving here but he was pretty shaky in his next attempts on the beach," said a staff member.

The rest is history as witnessed by this extraordinary footage of Big Bird soaring over the majestic Mahale Mountain range.

asting a little over 2 minutes did not only literally gave you a bird's eye view of extraordinary vistas but also provided us with a bird's eye view of a bird's eyes. When watching this video, it's important to remember that this experience was all new for Big Bird - comparable to imagining what it would feel like for a human hang-gliding for the very first time. 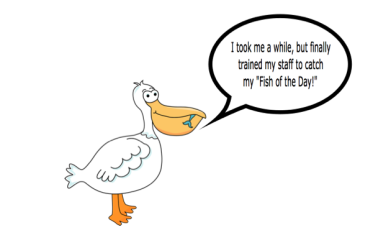 Fortunately for the owners of that GoPro device, Big Bird also lacked one additional attribute of his species - he did not know how to dive for fish. So that's why you don't see any footage of him sinking the camera into the Big Deep.

And like a homing pigeon, Big Bird returned to the very spot from where he took off. The staff indicated his first flights were “short and uncontrolled” and they “would look away when he was landing as he seemed to not distinguish between ground and air speed, coming in way too fast.”

Slate's A.J. McCarthy best summed up this collaborative experience between man and bird as "Birds and humans, working together in pursuit of flight—I think the word you’re looking for is magical." Magical, indeed! Magical and majestic!

This Elephant Must Have Seen Jurassic Park: Scary Animal Video of the Day!!!

The Bouncy Baby Goat Animal Video of the Day!!!
Comments