Animals Like To Get High & Other Lessons From "Zoobiquity" 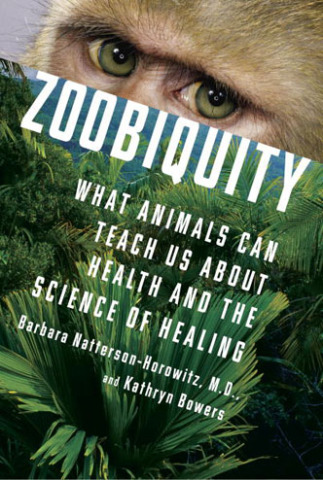 Zoobiquity: What Animals Can Teach Us About Health and the Science of Healing: by Barbara Natterson-Horowitz & Kathryn BowersYou will learn dozens and dozens of interesting similarities between animals and humans that you never knew before or even considered, just as cardiologist/psychologist Barbara Natterson-Horowitz discovered when she began her search into how veterinarians deal with stress-induced heart disease in their animal patients. Yes, animals have been known to die of heart attacks, but that is by no means all that we have in common with them health-wise.

Zoobiquity: What Animals Can Teach Us About Health and the Science of Healing, by Barbara Natterson-Horowitz and journalist Kathryn Bowers, contains their surprising discoveries of human diseases, illnesses, and even neuroses in members of the animal population and discussions of how zoologists and veterinarians regard and treat them. There is a commonality between animals and humans that has rarely, if ever, been presented before - at least in this way.

I don't want to ruin the book for you making lists of factoids gleaned from the pages of Zoobiquity, but my teaser instincts call on me to provide just one factoid that I've already given away in the title. I'll let the authors of Zoobiquity tell you about it.

The authors uncover so many fascinating facts about our similarities that are just too similar to be ignored.  After reading Zoobiquity, you might just want to make your next appointment for a physical with a veterinarian.

Read Zoobiquity: What Animals Can Teach Us About Health and the Science of Healing.  It's a 5-star read on Amazon with 30 reviews at this writing. Make mine 31.

Get A Partridge On A Pear For Your Tree

A Bear-y Nice Bouquet For Mom

Easter Is All About The Bunny
Comments