Pets & pumpkins go together like tricks and treats, especially this time of year when the Smithsonian's National Zoo provides their animals with plenty of pumpkins to help bring out the Halloween spirit. 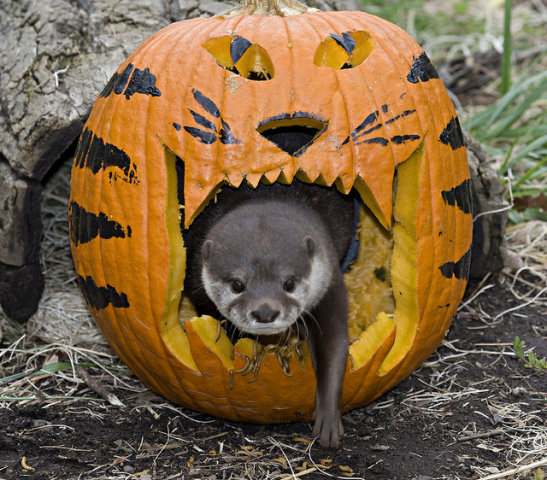 Living in captivity is much less dangerous for any animal - consider the lifespans of indoor, outdoor and feral cats for example - but zoo animals do need regular stimulation in their well-regulated lives. Events like the annual Halloween pumpkin (and other tasty treats) fest at the Smithsonian's National Zoo do double duty by stimulating both the animals and the people who visit them.

So you think pumpkins are for the birds, do you? Well... yeah, they are, actually! Remember cleaning out a pumpkin to use as a jack-o-lantern and being left with all the slimy seed-infested innards? The Smithsonian's National Zoo remembers too, and they've farmed out the cleaning job to their resident toucan.

Fish In An Orange Barrel

Fishing Cats don't normally eat pumpkins but they DO love fish, so hiding some fish inside a hollowed-out pumpkin makes for an ideal Halloween trick and treat!

This Ring-tailed Lemur has decided to crack open the top of this pumpkin-head and feast on the goo inside... not that there's anything wrong with that. Typical Halloween-style orange pumpkins aren't native to this primate's homeland of Madagascar but they do love to eat fruit and seeds, which pumpkins have in abundance.

The Naked & The Gourd

Naked Mole Rats? In my pumpkin? It's more likely than you think - actually, we never thought such a thing could be AT ALL, so the lead line is technically correct. What we really mean to say, is that the sight of these bizarre buck-toothed hive-minded creatures crawling out of a jack-o-lantern's grinning mouth isn't impossible... it's KIM-possible!.

If you can't be with the one you hug, hug the one you're with. Words to live by, and this satisfied-looking orangutan at the Smithsonian's National Zoo really, REALLY loves this pumpkin.

One, Two, Buckle My Shrew

Even tarantulas need stimulation but take a moment to feel for the poor pumpkin, which you'd better believe is silently screaming for mercy. Does this image remind anyone of the a particular scene from Home Alone?

"These pumpkins are mine, all mine," this Leopard Gecko appears to be thinking. The point is, ladies and gentlemen, that greed (for lack of a better word) is good. You know what else is good? Saving hundreds on your pumpkin insurance, that's what.

Worried about this sloth because he was only given a teeny tiny pumpkin? Don't be... the pumpkin may only be half as big as the usual jack-o-lantern gourds but being a sloth, it'll take the critter twice as long to eat it.

Orange you glad these animals get to enjoy Halloween as much as any human? Orange you glad you're not one of the pumpkins tossed to those animals? Don't the pair of lemurs above look like they would really rather have, say, bananas? Ah well, that's Halloween for you: some get the treats and others get the tricks. (Animals & Pumpkins images via Mehgan Murphy, Smithsonian's National Zoo)

Baby Will Love His Or Her First Reindeer

The Most Memorable Elephant Shirt Ever
Comments