Midori Nakayama is making a name for herself as a master of wool felt artwork memorializing dearly departed pets. Crafted with wire, wool felt, plastic eyes & noses and Nakayama's prodigious artistic talent, these lifelike recreations have helped grieving pet owners deal with their loss and move on with their lives. 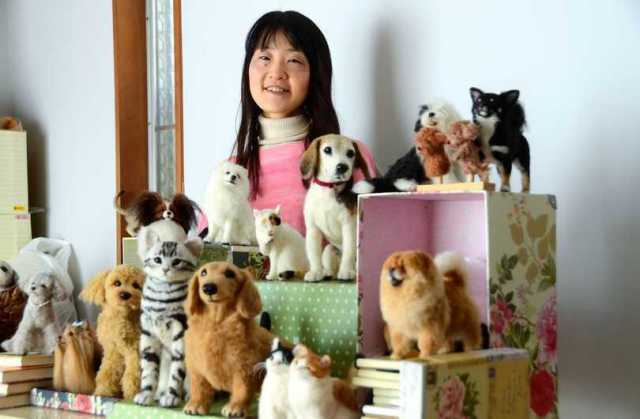 The 39-year-old from Tokoname in central Japan's Aichi Prefecture always enjoyed artistic pursuits and after being admitted to the department of Japanese painting at Musashino Art University, mainly focused on ceramics.

That all changed when she was hospitalized with a chronic illness in 2001. Believing that Nakayama would benefit from enjoying creative pursuits even from her hospital bed, a friend brought her some wool and felting tools. From that moment on, ceramics were supplanted by felting

.The basics of crafting felt animals isn't all that complex: once the subject's desired shape is formed from metal wire, felt is wound in and around it with the finishing touches being plastic noses and eyes sold at craft stores.

“I can make anything with fur, like a hamster or a rabbit,” explained Nakayama. The process can be surprisingly quick though more complex subjects can take as long as two weeks to complete.

As her technique became more refined, Nakayama won approval to display her works at local department stores. At that point she began receiving special requests along the lines of “I'd like you to help me meet 'my child' again,” from people whose pets had passed away.

The requests weren't selfish – on the contrary, many of those who asked Nakayama to try to reproduced their beloved companions in felt suffered from insomnia and other neuroses linked to their bereavement.

“The adorable expressions of these cats and dogs make them seem alive and have a soothing effect on people,” explains Nakayama, and “there are people who will love a work that another person would simply call an 'object.' There is no job more gratifying than this.” With the publication of her book Midofelt, Nakayama and her felted creations have achieved even wider notice – so much, in fact, that she's no longer able to keep up with personal felt recreation requests and has had to suspend taking orders.

In the meantime, she continues to exhibit her works at large Japanese department stores such as Takashimaya. Shop at one of their stores and you just might spot some of Nakayama's felt felines and woolly woofers. (via The Asahi Shimbun AJW, images via Midofelt online)