All The Presidents' Pets

I used to think Harry Truman was an okay guy until I
learned that he gave away the Cocker Spaniel he was given as a gift. Guess the president who said, "If you want a friend in Washington, get a dog," didn't want a friend after all. 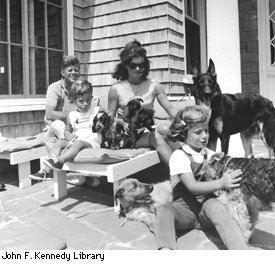 President Kennedy and his family with just some of their pets!: image via presidentialpetmuseum.comPresident Truman gave 'Feller,' a handsome blond Cocker Spaniel, to the White House physician, who gave him to Truman's
Navel Aide, who gave Feller to someone else... Finally poor Feller did get a
home, but he must have had a dozen of them before he died of old age.
Fortunately for other White House pets, they received the best attention
of their owners.

You learn a lot about people when you know the
kinds of pets they choose.  And you can learn more about U.S. presidents
from the pets they housed at the most famous American house of all: The
White House.

John Kennedy's White House was full of pets.  He,
Jackie, and the kids had several breeds of dogs, but most famous was his
Welsh Terrier, Charlie.  Then there were cats, Jackie's horse, a few
ponies, a canary, parakeets, and even a rabbit name Zsa Zsa. 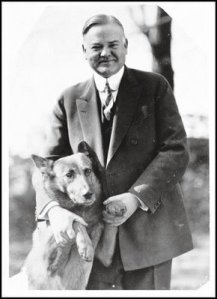 President Hoover and his dog, Tut: image via presidentialpetmuseum.comCurious
about Coolidge?  The Coolidge family had 'a zoo' at the White House,
almost as many dog breeds as were recognized by the American Kennel Club
during the twenties! Birds galore too: canaries, a thrush, a
mockingbird, and a goose.  And... cats, raccoons, a donkey, a bobcat,
lion cubs, a wallaby... even a pygmy hippo!

Aww... That's nothing! John Adams had a pet alligator! (It seems that some presidents didn't want to insult foreign dignitaries when they landed exotic pets on the White House doorstep.)

Both
Theodore and Franklin Roosevelt loved animals and they had plenty of
them during their tenure at the White House, but some presidents, such
as Chester A. Arthur and Franklin Pierce didn't have any pets while in
office.  And, of course, our two most famous American presidents, George
Washington and Abe Lincoln had lots of pets, otherwise they never would
have made it to greatness!

These fascinating tidbits about
Presidents and their pets can be found online; even better sources are
the Presidential Pet Museum itself in Glen Allen, VA, here introduced by
the curator and co-author of First Pets: The Presidents And Their Pets,
Claire McLean.

Do check out at least the website which introduces each of the U.S. presidents, their pets, and some great original photos!

Free Bird: Shoebill Rescued From Poachers Returned To The Wild

Animals Talk To Each Other With Civility