ALEX, The Parrot Who Knew What He Was Talking About 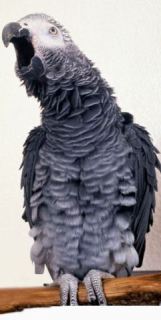 It's been long believed that parrots could only mimic human speech -- that they could not comprehend what they were taught to say. Differing from that position, it's been scientist Irene Pepperberg's mission to prove that theory a fallacy, and she's spent several decades debating this issue with the scientific community. The African Grey she named ALEX (an anagram for 'Avian Learning Experiment') was her subject and over the course of his 30-year lifespan, he appears to be proof that his and other related species do actually possess cognitive abilities.

More than All Talk

Alex's accomplishments indicated that birds may be able to reason in a basic way and use words on a creative level. Pepperberg's research noted that Alex's intelligence was on a par with dolphins and the great apes.

She also reported that Alex had the intelligence of a five-year old human and achieved the emotional maturity of a two-year old child at the time of his death in 2007. Had he lived longer, Pepperberg believes he would have been able to graduate into an even greater cognitive level of understanding. 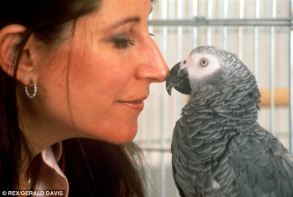 Irene & ALEXIn fact, the very last time the scientist held a conversation with Alex, it was the evening before his death. She described his mood and demeanor at the time as being "chatty and affectionate."

"There was nothing unusual about (the exchange) -- we'd developed a strong mutual bond," notes Pepperberg.

"You be good. I love you," said Alex, as I prepared to leave the laboratory.

"You’ll be in tomorrow?"

Also capable of mischief, Alex had his 'naughty boy' moments as well. In 1979, when Pepperberg stayed up all night to complete a 20-page application for a grant, she mistakenly left it within Alex's reach, when she went out for lunch. By the time she got back, Alex had chewed right through it.

"How could you do such a thing?," cried Pepperberg upon her return.

Alex cowered a little, then looked her straight in her eyes and said: "I’m sorry?... I’m sorry." Since she had never taught him those words, she was amazed at his comprehension of having heard those words in other similar situations. Clearly, Alex had worked out that "I’m sorry" is associated with defusing a tense, angry and potentially dangerous moment.

Skeptics will be Skeptics

Interesting that still to this day, the skeptics continue to report that parrots are only capable of mimicking words. In the world of science, to prove of disprove a theory, tests need to be conducted under many different sets of conditions. Pepperberg noted that sometimes these tests "need to be done over and over again - sometimes 60 times or more - before the answer has statistical legitimacy."

Another theory is that parrots think like human autistic savants. When the now-famous Temple Grandin argued that animals and autistic savants share cognitive similarities in her best-selling book Animals in Translation (2005), the idea gained steam outside the community of cognitive neuroscientists. 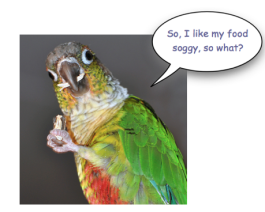 She also claimed that autism helped her understand and empathize with animals and birds, who supposedly think in pictures, better than non-autistic humans.

I  personally see validity in this theory, based on the experiences I've had with a much smaller member of the parrot family, my Green-cheek Conure.

When presented with a cracker, we'd find him dunking this treat into his water cup. Since he was never trained 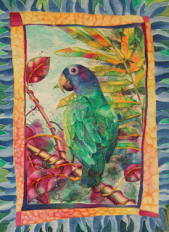 to do this, and since he does not know the word for "water" or "soggy cracker" - I think he's been able to cognitively figured out "visually" that wetting food in a water cup is going to make it easier to chew and digest. I might be reading into this behavior, but having named him Gauguin, I have very high expectations for our very smart little bird.

This Is One Super-Smart Yorkie! The Animal Video Of The Day!!!