For the fourth year in a row, we had a terrific group of costumes to
choose from for Lady Bee's 2010 Pet Costume Awards.  We're giving
13 awards in categories such as Best Lady Gaga, Best Church Bingo, Most Helpless, Fiercest, and Best Naughty Sex pet costumes.  We also award a Grand Prize for the best pet costume overall.  The winning entries came from the
dog, cat and bird species.  Sorry, no reptiles this year.

Without ado, I'll let these pets and their costumes speak for themselves. 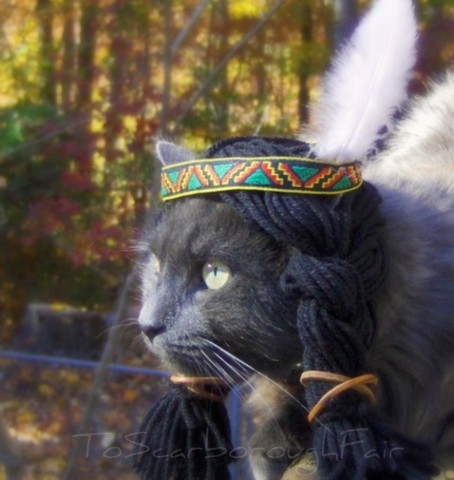 Cat costumes are usually pretty lame, unless they are Japanese. But the ToScarboroughFair shop at Etsy.com
is responsible for designing this cat headdress and other costumes for
cats that represent the pioneer days and Thanksgiving.  The head
coverings by this intriguingly specialized designer are all handmade and
make wonderful Halloween costumes for cats. The designer even provides
advice about placing head coverings on your cat so they will stay there.

The Disney company came up with this brilliant costume, inspired by The Lion King, which looks so real on this dog! 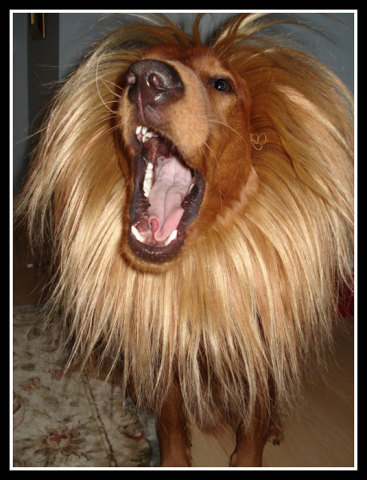 I'm not yawning, I'm about to eat you, you fool.: ©Disney Costume Ideas

Maybe not so fierce on a little dog, but very cute! 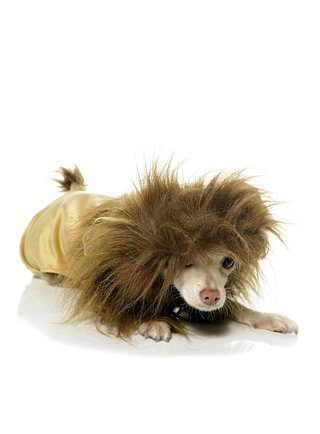 The Lion Dog Costume is available at Maskworld.com in many sizes. (Update: Maskworld.com  no longer has the costume, but you can see other lion costumes here.) 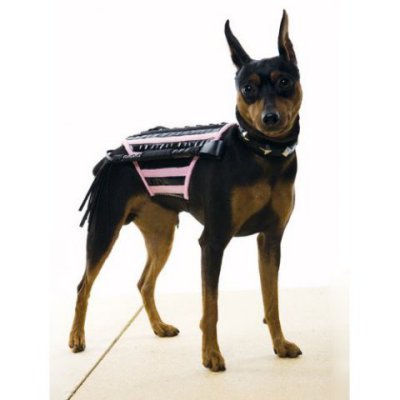 The Doginatrix Dog Costume is just perfect for a Doberman... don't you think? 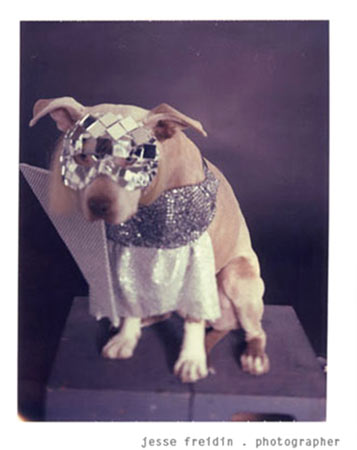 The
hot costume for dogs this year is a Lady Gaga costume.  Doggy Gaga
costumes are many and varied, but this blingy Gaga took the prize.
Photographer Jesse Freidin has photographed an array of them, adorning professional dog models. 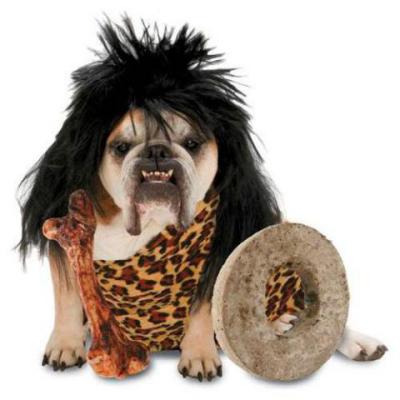 You have a bone to pick? Well, it's not going to be mine!: Zelda Cave Dog Costume

For those of you who don't know Zelda, she's one of the most popular dogs around, her mom having made her into a legend in her own time. Charles Gibson of Good Morning America called Zelda, "the industry's top dog." No doubt, he was referring to the marketing industry.  Among Zelda's many talents, she's a clothing model, and her mom... well, she designs some awesome costumes for her.  Zelda's Cave Dog Costume is available from Amazon.com. 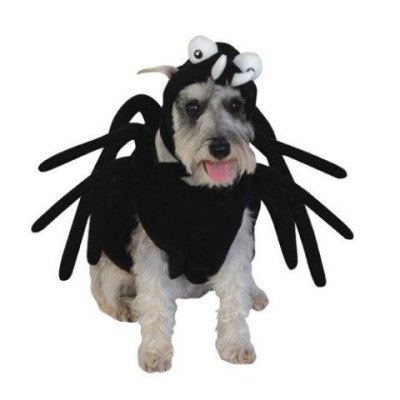 What do you THINK I'm supposed to be? A black octopus?: Spider Dog Costume

This cutie - the costume, that is - comes in several sizes at  Amazon.com,
but I can't imagine a dog feeling any dignity in it - especially when
the stuffed spider legs wiggle all around when he walks. 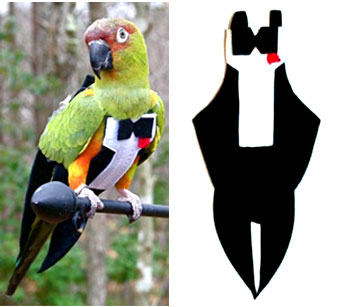 My tailor made this for weddings and funerals.: image credit FlightQuarters.com

Avian Fashions always
keeps their birds in fashionable clothing that doubles as diapers, so
the birds don't make too much of a mess on your own clothing... and
elsewhere. 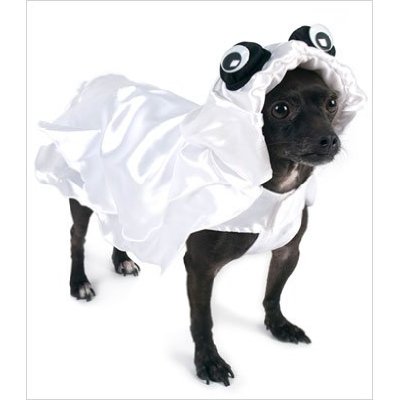 Suppose I meet a real ghost in this outfit?: Ghost Dog Costume

The Ghost Dog Costume
is so cute with the beady black eyes up on the head. The outfit has
three layers so air fills them up and it looks really spooky when your
dog moves. Even more ghostly on a white dog! 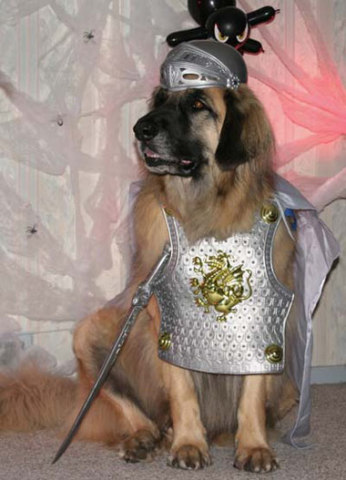 As the first dog to be knighted by the Queen, I take my responsibilities very seriously.: Knighted Dog Costume, image via Doggibling.com

I
have not been able to locate a retail source for this costume (maybe it
is handmade), but it is quite original and it's very becoming as well. 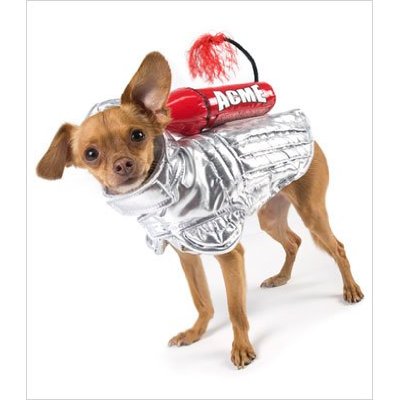 "To the moon, Alice, to the moon!": Rocket Space Dog Costume

The metallic silver jacket and the plush red rocket give lots of pizazz to the Rocket Space Costume.  This is a well made costume, so it's a bit pricey, but promises to be in style for a long time to come. 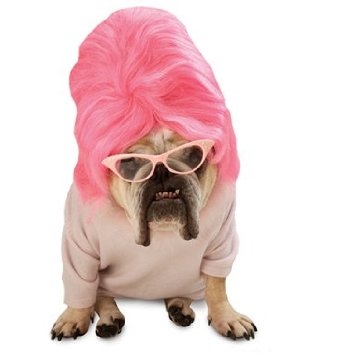 I won't lose my purse or my keys... I stored them in my hair.: Zelda Bouffant Dog Costume

A second award for Zelda, she's a veritable gambling grandma here, and
I wonder what words of wisdom Zelda would have for this costume.  Zelda
left her pink satin heels at home, but you can purchase the
rest of the costume at Amazon.com. 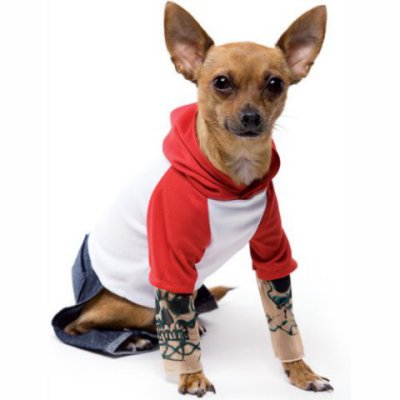 I'm not a biker; I just like tattoos.: Tattoo Dog Costume

This costume should not give you any ideas... It's just a costume... available at Amazon.com. 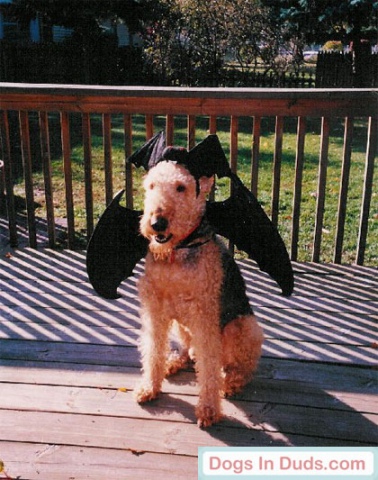 This is Bat Waldo in his Barking Bat Dog Costume: image credit: DogsInDuds.com

The Barking Bat Dog Costume is an adorable costume on the right dog.  This Airedale carries it off!

Lady Bee's Halloween Safe Tips For You And Your Pets

Have a happy and safe Halloween with your pets!

PetsLady's Pick: Funny Animal Of The Day
Open Wide! It's Time For A Snack Attack!