10 Facts You Probably Didn't Know About Owls (with video) 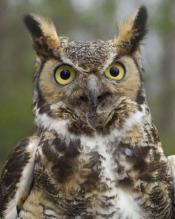 Great Horned Owl: image via tonypratt.com
Owls are awesome. Sometimes we hear their calls at night indicating their whereabouts to their mates, but we seldom actually see our neighborhood owls, because they are active at night, when we humans don't see too well.  They say owls can't see during the daytime, but that's not true.  They see fine in daylight, they just see incredibly well at night.  Here are some more facts about owls, some of which you may not have known....

1. Owls can not rotate their eyes up and down or right to left - they can only look straight ahead with binocular vision of only a 70 degree radius.  Humans have double the range of binocular vision, but an owl can see far better than we can (although not directly in front of them, as owls are quite farsighted).

2. The owls' narrow range of vision is compensated for by their ability to rotate their heads 270 degrees, including the ability to turn their heads completely upside down.

4. Owls have extremely sensitive hearing, but their ears cannot be seen, as they are located behind the owl's eyes. Their hearing is so good that they can even hear their prey moving underground. 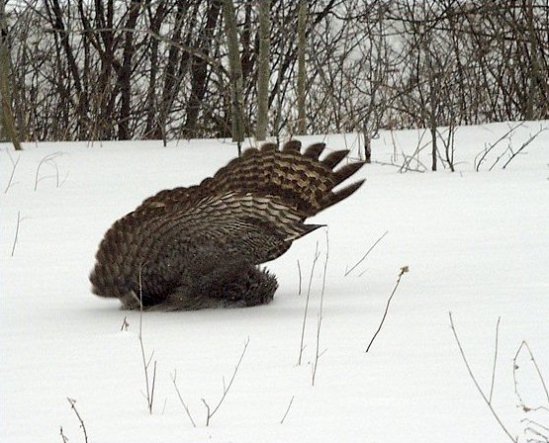 Owl dives on his prey he can hear moving underground

5. What are known as 'ear tufts' are not 'covers' for the ears; they are responsive to the owl's mood.  For example, ear tufts tend to fluff up when the owl is being aggressive.

6. Owls approach their prey silently, aided by their soft feathers, lightweight bodies, and specialized wing shape during flight.  They kill their prey with their strong, sharp talons.  Watch the feathers on this eagle owl as it lands in this high-speed video by virtrunner...

7.  Owls will swallow small prey whole,but their digestive systems are so efficient that they only digest what is nutritious. The rest of the animal, such as the bones and fur, are regurgitated in 'pellets.' The pellets leave clues for scientists as to owl nest locations and diet.

8. Unlike most avian species, it's the female owl that's generally larger and more colorfully plumed than the male.  Females are typically more aggressive than males.

9. Do you think that a British government body got its name from a group of owls, known as a parliament? 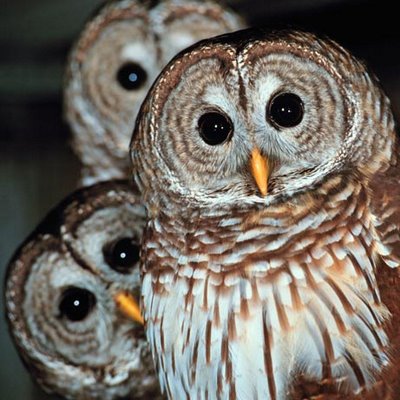 A Parliament (a group of owls): image via orthagroup.org

10.Some species of owls have hairy legs and feet.  This is to protect them from getting rat and snake bites!

Owls are awesome birds and the chicks are very cute, but owls are hunters and do not make good pets; just ask the bird sanctuaries in Britain how many owls they've had to rescue since the Harry Potter movies made every kid in the country want an owl!  You can admire them without owning them.

That's the hoot for today!